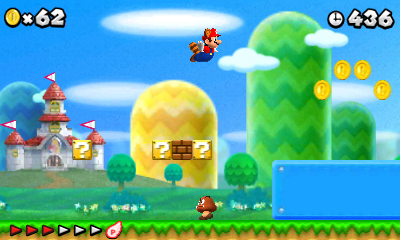 Defying expectations,  the story in New Super Mario Bros. 2 is a complicated tale of subtle nuance and richly detailed character development. It begins with the kidnapping of Princess Peach by Bowser’s children, forcing Mario to pursue them to through…. wait. What was that? You’ve heard all this before? Well, crud. It would seem that the plot of NSMB2 is “derivative,” which I’m using because it takes way to long to write “a superficial and utterly phoned-in bit of cotton candy fluff that makes the Super Mario Bros. movie look like Shakespeare.” Of course, a useless and placeholder plot is nothing new to the franchise; the first two New Super Mario Bros. games had equally pointless stories. The real tragedy is that this game had something those didn’t, and it could have made for a much more memorable tale. The meta-game focus on coins, which I’ll touch on in a moment, is not explained or even mentioned in the game itself, which seems to me like a wasted opportunity to give more backstory. Maybe this is how the Mushroom Kingdom pays for all those green warp pipes, or perhaps they’re trying to raise money to install a better security system for the royal family. Even a gripping tale of Mario paying his taxes would have been better than what we were given.

While the story might be non-existent, one area of the game that won’t disappoint players is the level design, which is some of the best in the series. Some of the standouts include: a jungle level where the player must time his jumps with the rising and falling of the poisonous water below, a pipe maze that has numerous branching pathways, and a homage to Indiana Jones where Mario is pursued through the level by a giant boulder. Each level has secret paths a player can only find by scouring high and low (and sometimes sideways). These hidden areas lead to Star Coins, power-ups, and alternate exits. Out of the game’s nine worlds, two of them can only be accessed by finding these secret routes. I enjoyed scouring each world, trying to unlock all of the hidden stages and warps. 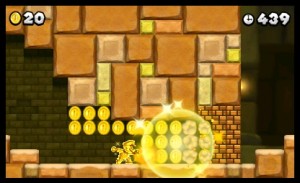 The gameplay should feel instantly familiar with anyone who has played any of the previous New Super Mario Bros. titles, or, for that matter, any 2-D Mario platformer ever. Running, jumping, sliding, flying, and swimming are all as easy as they’ve ever been. The controls are tight, and any deaths experienced can only be blamed on the player. Not that deaths are ever really a concern in this game. Due to the large number of coins found in all the levels, it is rare to not receive an extra life every time you start a level. As it stood, I finished the game with over 250 lives. This is fortunate, as some of the level hazards can be surprisingly devious. Each level has three Star Coins hidden away, and getting to each one is sometimes a challenge in and of itself. Helping you on your quest are a number of power-ups, ranging from the omnipresent super mushrooms and fire flowers to the welcome return of the flight-granting leaf. New to NSMB2 are several golden power-ups, such as golden rings which cause koopa shells and other enemies to leave coins in their wake. More fulfilling is the golden fire flower, which allows a golden Mario to throw fireballs that kill any enemy and turn blocks into coins. For players having a tough time with a certain level, five consecutive deaths will cause a block to appear with a golden leaf, making you invincible and making flight much easier. It is with my pride intact that I report that I never used this handicap, although I did get the option more times than I would like to admit.

Upon booting up the game, you will notice a seven digit number on the title screen. This is a counter of all the coins you have collected while playing. The ultimate goal is to acquire 1,000,000 coins, and completing said goal will net you a mystery prize that I won’t spoil for you (definitely not because I just don’t know what it is). A single playthrough of the game, including the alternate paths and hidden levels, netted me around 40,000 to 50,000 coins, so you can see that making it to a million will give players a goal that will keep them playing long after the credits first roll. Working into the coin collection meta-game is the new Coin Rush mode, where players are asked to complete three randomly selected stages in an attempt to get as many coins as possible. Successfully grabbing the top of the flag pole will double your total score, so you can rack up thousands of coins on each attempt, making it the most efficient way to earn coins in the game. New Super Mario Bros. 2 also supports two player co-op play through the entire game. From what I’ve been led to understand, it plays very similarly to how the Wii version does. There is even the bubble feature, where one player presses a button to encase their character in a bubble that freely floats around the screen. This allows players who are having difficulties with certain areas to allow their partners to complete them, after which they can be popped and brought back into play. Unfortunately, the co-op is local, and requires both players to have the game. Sadly, I’ve yet to find anyone willing who fits these criteria, so I cannot provide a firsthand impression. 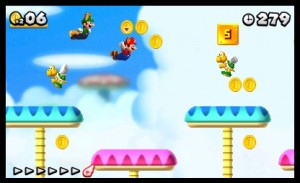 Graphically, New Super Mario Bros. 2 is about on par with the Wii version. Mario and the various enemies look nice and have smooth animations. The stages themselves are very nice to look at and offer players a good amount of variety. Unfortunately, Nintendo seems to be ignoring the 3D part of the 3DS, as adjusting the slider only causes the background to recede and blur in layers. The one area that truly disappointed me about New Super Mario Bros. 2 was the music. Almost every song in the game is a port from the Wii or DS versions. In most cases, some small sound effects were added to spice them up, but the overall soundtrack just comes across as lazy. The one exception to this is the credits music, an original tune that has a jazzy energy to it that the rest of the music lacks. The sound effects are also quite familiar, with all of the classic jumping, coin grabs, and power ups you would expect. The overall package is serviceable, but with a little more creativity, it could have been so much more.

There was one more thing that I wanted to mention in this review that isn’t completely related to the game itself. New Super Mario Bros. 2 marks an important first for Nintendo; it is the first time they have released a major first-party title in both physical and digital forms at the same time. To see how well this system works, I logged onto the  eShop and purchased the game. I must confess that I was surprised by how smoothly the whole process went. I expected the a lengthy queue or some other issue, but I had the game purchased and completely downloaded within a half hour, less time than it would take me to drive to my local GameStop and back to pick up the physical copy. Overall, I’m very satisfied with the system, and would be willing to use it in the future with other titles. One word of caution, though; the game took up a large chunk of my internal memory, so to download any other large releases, I’ll probably have to get a larger memory stick.

While I wish that a bit more care was taken with the story and music, overall I feel that New Super Mario Bros. 2 is a worthy addition of the franchise. The platforming remains the best in the industry, and the switch in focus to coin collection gives players a reason to get the most out of each level. If you are a fan of Mario, you will not be disappointed by what you’re getting. At the same time, you won’t be surprised either, so take that into consideration if you are one of the people who have tired of platforming. For everyone else, this is the best handheld game in the series, and I for one will continue playing so that I can help Mario raise a million coins to start his fire flower nursery.