A few years ago, developer Hothead Games (responsible for the Deathspank games) partnered with the comedic minds behind the popular web comic Penny Arcade to release the first two episodes in the Penny Arcade Adventures series of games. Introducing a unique RPG gameplay style to the cartoony visual style and humor associated with the Penny Arcade characters Tycho and Gabe, the games were a big hit. Now, four years later, critically acclaimed RPG developer Zeboyd Games, of Cthulhu Saves the World and Breath of Death VII fame, has been drafted to finish the series with Episodes 3 and 4. 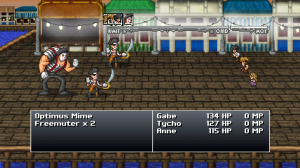 Episode 3 returns to the roots of 16-bit RPGs, and does so fantastically. You won’t find any voice acting, fancy graphical effects, or sweeping vista shots here like you would in recent console JRPGs such as Lost Odyssey or Final Fantasy XIII. Instead, you will find a near-perfect mix of genius writing with gameplay mechanics, which marry together to form the best RPG I’ve played in years. The fact that this is coming out for just $4.99 is the biggest “plot twist” for me.

The game sets you in control of Tycho and Gabe, the two characters behind the Startling Developments Detective Agency. As they explore an ever-increasingly weird and confusing set of events, they pick up Anne-Claire and run into some familiar faces. Although it picks up just a few weeks after Episode Two left off, the game does a fantastic job of letting anyone jump straight into the game with little to no preparation. Discussing the story too much will result in unintentional spoilers, so while keeping discussion to a bare minimum, I can say that I was engaged for the full 12 hours that the game took. It ended at the perfect time, and was paced brilliantly. The game even made me do something that no RPG this generation has ever made me do before: I felt compelled to jump right back into it on a higher difficulty level without a break. That is perhaps the highest praise I could ever give an RPG.

The obligatory “job” system in this game is handled wonderfully. Characters start out with different classes (Tycho is the Scholar, Gabe is the Brute, etc.), and after roughly 20-30 minutes of gameplay you earn badges that you can give to a player which act as their job. You can switch badges as often as you want, which reminds me of the crown system in the wonderful DS game Final Fantasy: The 4 Heroes of Light. Micromanaging your party feels like more of a puzzle than true combat, which is something reflected further in the combat system itself. 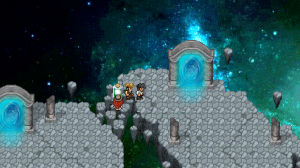 The combat system seems to be a mix of classic Final Fantasy games. Turn order is determined by the combatant’s speeds, and can be viewed by an actively-moving gauge at the top of the screen. When your character gets roughly 2/3 of the way through the gauge though, the game pauses to let you select your choice from a menu. Once chosen, the bar begins to move again. Once your character reaches the end of the bar, they perform their action and go back to the beginning of the gauge. This leads to a ton of variation, as not all attacks and enemies will go at the same speed. If a character is moving especially slow through the bar, for instance, it is clear that they are about to unleash a huge attack. If you die, you lose absolutely nothing, and are simply required to re-do the battle. Add to this fact that you fully restore your health after every combat, and you have a wonderfully unique blend of concepts that, like the rest of the game, marries extremely well.

The weak link here is, sadly, the music. The soundtrack is in no way, shape, or form “bad,” but the problem with making it reflect soundtracks of 90’s RPGs is that the music can become pretty repetitive, and after a while, slightly grating. All of the music is wonderful, but with less variation than the rest of the game, it does not stay as fresh as the rest of the game does over the course of the gameplay. 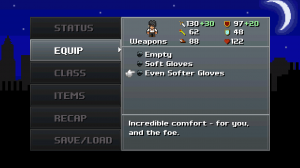 The last major point to talk about is the sense of humor. Given that it is a Penny Arcade game, the game is predictably based on the in-game comedy. With that in mind, the humor itself is very rarely predictable, and kept me laughing my head off out loud constantly, to the point when I was made to play the game only when I was alone. Zeboyd and Penny Arcade never missed a chance to throw comedy into the mix, even with things as basic as enemy or item descriptions.

When a game is both extremely compelling to play through the battle system, retro stylings, and puzzle-like nature, and is just as – if not more – compelling to read through due to its humor, it is hard to find any reason to not recommend it. The only people I wouldn’t recommend this to are people with no sense of humor, or that dislike RPGs in general. But if you’ve gotten this far in the review, you probably don’t fall into those categories, so pick this one up immediately! Now, if you’ll excuse me, I’m off to go play through it again at a higher difficulty.

Full disclosure: This game was reviewed using a copy provided by Penny Arcade.