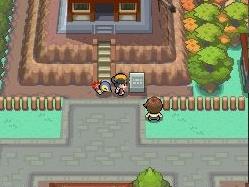 Nintendo’s latest installment in the Pokémon craze is actually a remake of Pokémon Gold (and its sister title Silver) which originally released in 2000 for the Gameboy Color. Game Freak added a few new features in the Nintendo DS version, but it is a lot of the same old Pokémon fare.

For those who aren’t familiar with the series, Pokémon HeartGold and SoulSilver take place in a world where monsters can be caught and raised by pokémon trainers. The only difference between the two games is that there are some pokémon that are only available in one or the other. Trainers raise and evolve their pokémon by battling against fellow trainers and wild pokémon. The story itself is not deep or terribly enticing; it is mostly a vehicle for getting your character from area to area to collect pokémon. You play as a young trainer whose dream is to become the greatest pokémon trainer in the world. In order to achieve this goal, you collect a badge from each of the eight gym leaders, the strongest trainers in each town. Along the way, you have multiple encounters and battles with your rival who wants to be league champion, too. You can also search for legendary creatures and help to stop Team Rocket from terrorizing the Johto region. After you establish yourself by beating all of the gym leaders in Johto, you get the chance to beat the “Elite Four,” the strongest pokémon trainers in the region. After establishing your abilities in Johto, you get the chance to fight all of the gym leaders in Kanto, where Pokémon Red and Blue take place.

As you travel, encounter and capture pokémon, you will fill up your Pokédex, a computerized reference system that logs data on all of the creatures you meet. There are 250 monsters to find in the Johto region alone, and once you gain access to Kanto, the national Pokédex allows for almost 500 entries; so, if you’re the type who needs to catch them all, you’ll have plenty to do. Once you get the National Pokédex, veteran pokémon trainers will eventually gain the ability to import creatures from your GBA Pokémon titles, making the job of filling the National Pokédex much easier. 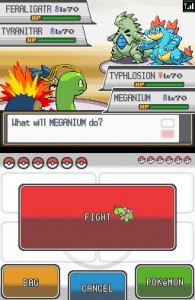 The game also offers numerous side quests and mini games where you can find more pokémon and items. The Safari Zone lets you catch pokémon with the twist that you can’t battle them with your own pokémon first, and the Pokéathlon Dome lets your pokémon compete in various athletic events. Eventually you also unlock the Battle Tower where you can hone your pokémon’s skills against a gauntlet of battlers. The game also offers online functionality where you can trade pokémon anywhere in the world via the Nintendo Wi-Fi Club or with friends via a DS-to-DS link-up.

The format of the battles once again remains unchanged. Most of your battles will be fought one-on-one versus one other pokémon, but there are a few battles where you will fight two-on-two. The battle system is fully turn-based where all pokémon choose a move and then they each attack in turn based on speed and a few other factors. The strategy comes from the fact that there are a wide variety of types that are all strong or weak against each other. Fire attacks work very well against grass-type creatures but are not effective against rock types. Grass moves are good against water-types but bad against flying, etc. These considerations are further compounded by the fact that each pokémon can only remember four moves at a time. As you level your monsters, they will learn new moves, but once they know four moves, you must choose whether to forget a previous move or not learn the new move. Some people may find this arbitrary limitation very frustrating, but others may enjoy the strategy and planning that it forces you to employ. Once you learn the types-weakness system, the battles do get somewhat easy as you can take down enemies 10 levels ahead of you with one hit if you use the appropriate attack.

Graphically, Game Freak did not break the bank with the graphics. While they are better than the Pokémon games of old, they are not much different than those found in Diamond and Pearl. All of the characters are represented on the world map by sprites and the enemies in battle do not look much different either. The music has been redone in a much higher quality than the original Gameboy version, but you can also eventually unlock the 8-bit version of the score as well. There are a few different songs that play during travel and battle, but eventually they do start to get old and repetitive. 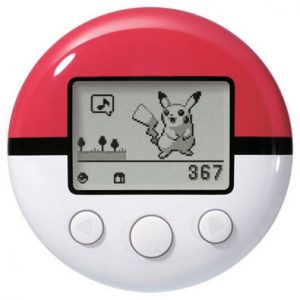 The game also comes with a “Pokéwalker,” a pedometer that you can use to help level your pokémon and catch new ones. You can put one of your monsters in the Pokéwalker and carry it around with you when you can’t play your DS. As you walk, it builds up “watts” that can be used to try to catch pokémon in the walker and go dowsing for items. If you take enough steps you will also raise your walking companion up one level; however, you will not necessarily learn moves if your pokémon is in the walker; so, be careful about that. As you walk, you unlock new “routes” your pokémon can travel in the walker, and these routes determine the types of items and pokémon you can find with your watts.

If you’re a newcomer to the series, HeartGold (or its sister title SoulSilver) is a great entry point as it combines an older game with new features and a plethora of monsters to catch. For veterans of the series, it’s certainly a worthwhile addition to your collection, too.