In Pokémon X, you play as a child on an epic journey to become a Pokémon Master. Along the way, you’ll avoid school entirely as you catch Pokémon, battle trainers, and face off against the Elite Four, ultimately saving the world and becoming your region’s Champion.

Sounds like every Pokémon game ever made, right? Game Freak hasn’t shaken up the series formula for the jump to the 3DS, but it’s still working well.  There’s a whole new story and a boatload of cool new features to talk about though, and here’s the lowdown.

Once again, a fashion-oblivious group of baddies is out to steal everyone’s Pokémon. They call themselves Team Flare, and they plan to create a beautiful world just for their group of stylish, young, rich people. There’s not much to the main plot, but it’s certainly interesting, with hints at themes of surveillance, overpopulation, consumerism, and self-image. You’ll find that everyone in Kalos wants a tip, for example, and you can’t even shop in some stores unless you’re “stylish” enough. (It sounds ridiculous, but there’s really a number stored in your game that tracks how stylish you are.)

Though the main story is a bit contrived as usual, Pokémon X does deserve high marks for characterization. As soon as you move to Kalos, you’ll meet your four neighbors, and of course, you’re all setting out on a Pokémon journey. Not everyone wants to be the Champion, though. You’ll have your standard rival battles, but only one of your friends will actually be a trainer rival. Each of the others has a different goal, whether it’s completing the Pokédex, making new friends, or putting together the best Pokémon dance team on the planet. Each has a different perspective on the whole experience, and interacting with them can be truly heartwarming. They show that a Pokémon adventure can be more than just battles. Hopefully someday, the developers will craft a main series game where your ultimate goal doesn’t have to be entering the Hall of Fame.

Of course, for now, the Hall of Fame is your goal, and to get there, you’ll need to catch and battle plenty of Pokémon. Capturing is basically the same as before, except that now you gain experience for it. The battle system hasn’t changed much, either: You still send out the first Pokémon in your party at the beginning of each fight and use the attacks and healing items at your disposal to win. The one major change is Mega Evolution, which lets you evolve certain Pokémon to a new form during battle. This makes the Pokémon’s base stats higher and in some cases changes its ability and/or type.

You’ll probably forget to use Mega Evolution as soon as you have access to it, though, because if you actually use the revamped Experience Share, you’ll be 10 or more levels above anything the game throws at you pretty early on. You get this newfangled Experience Share after the first gym badge, and it gives every Pokémon in your party half the experience they would have received if they’d fought alone. This does break the usual system a bit, but it reduces the need for grinding, which is nice. This could also encourage players to shuffle their main party more often since it’s less annoying to level Pokémon up. In future games, however, it could be nice to give players the option to have the Experience Share work the way it did in previous generations. The only other change that actually affects battle is the addition of Fairy-type Pokémon, like the new Eevee-lution Sylveon. You’ll need to rethink type matching strategies since Fairy Pokémon are immune to dragon moves and serve to balance some other types as well. Fairy Pokémon actually seem over-powered in general, like psychic-types in Generation 1 (Gardevoir, which is now fairy/psychic, is truly a force to be reckoned with), so hopefully they’ll get balanced a bit in the next generation.

Apart from the new story and battle adjustments, one of the most obvious new things about this generation is the switch to 3D rendered graphics. The change might take some getting used to, but the whole game really looks stunning. There are some gorgeous views you can see while bicycling next to one of the rivers, and walking amongst the tall buildings in the hub town of Lumiose City is quite something. Battles look awesome in the new system too: Pokémon actually have a good range of motion, and the camera even pans around to show different views of the scene. Since each Pokémon has a complete 3D model, you can even check them out from different views in the Pokédex. One of the best things about the new engine is the fact that you can actually move along a diagonal line, which makes getting around a bit faster. (It would be even faster, however, if you had a Pokémon to ride on wherever you go, instead of only in select locations.) Pokémon X also uses the 3DS’ glasses-free 3D, and the effect is nifty where it’s actually applied. Cutscenes, battles, caves, and certain indoor environments use the 3D effect, but the overworld and some indoor areas don’t, which makes for a lot of jarring transitions that might make you feel motion sick. 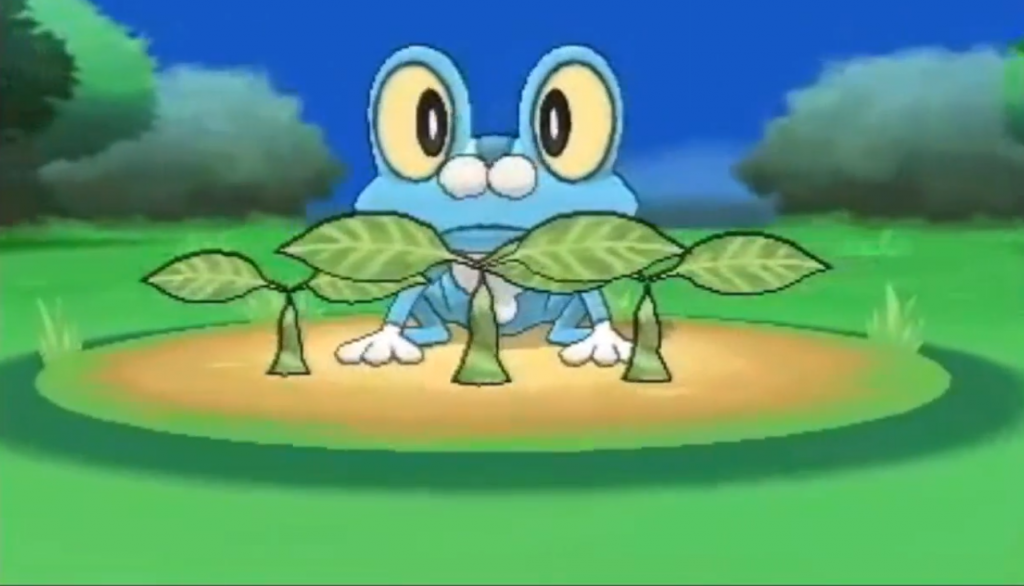 It’s great to see your Pokémon character in more detail, too, since your trainer is highly customizable for the first time. You have few options at first, but eventually, you can change your haircut and color. You’ll also have access to contact lenses to change your eye color. There are several shops that sell hats, shirts, pants, and so on, which makes dressing up your character entirely too fun. Their inventory changes at random every day, so check often if you want to put together that perfect outfit. Unfortunately, you can’t actually go hatless, but that’s small price to pay for being able to make your trainer look more like you.

Character customization also adds to your online profile, since your trainer’s face can be your public icon. Thankfully, Pokémon X excels at taking advantage of the 3DS’ online capabilities. You can finally access the Global Trading Service and battle trainers online, without going into a Pokémon Center, which puts this game light years ahead of any other Pokémon game in terms of convenience. With the new Wonder Trade system, you can send out Pokémon for trade with random players; the only downside is you never know what you’ll get in return. There’s also a voice chat feature so you can talk to friends during trades and such, but you can’t use it while you’re actually running around in the game, and both of you have to have the right parental control settings activated in your 3DS. If you want, you can also create a PR video for your character to share with the world, which is more amusing than you might expect. 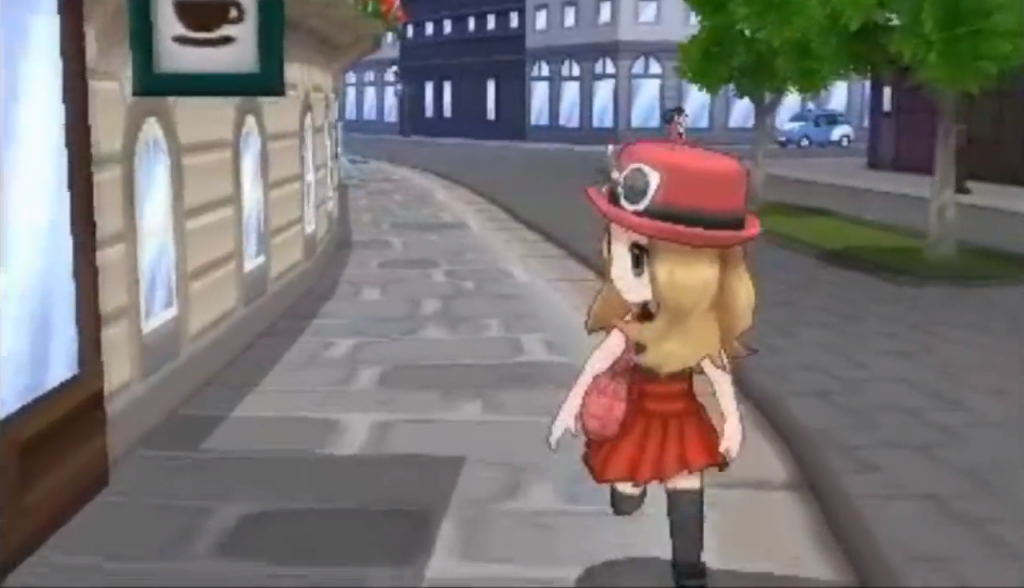 Adding friends has also become easier. If you battle someone online, you can ask them to become in-game friends, and if you’ve already added someone’s friend code to your 3DS, they will automatically be added to your friends list in Pokémon when they play the game. Having more friends is actually beneficial whether they play Pokémon or not, because eventually you can visit the Friend Safari to capture a different set of Pokémon for each friend in your 3DS list. One of the best online features is the ability to share O-Powers, which are basically the same as Pass Powers from Pokemon Black/White, with players anywhere in the world. As you use your O-Powers more often, they increase in level and make the boosts more useful, which is a bit like using buffs on random players in an MMO. The ability to do this over the Internet is definitely a huge step in player interaction. The StreetPass functionality is disappointing by comparison: whenever you tag other players, you get PokéMiles, which you can redeem for items by either syncing your game with the Global Link or visiting a Pokémon Center in Lumiose City. You also get PokéMiles from trading, though, so there’s not much point to it.

Pokémon X also adds a couple of entertaining minigames to the mix. If you like to train for IVs, you’ll love Super Training, which lets you train up specific stats. You can even unlock secret levels to farm for evolution stones. The other minigame, called Pokémon-Amie, helps you make your Pokémon more friendly, which actually has benefits in battle. You can pet the Pokémon with the stylus, have them respond to your facial expressions, and feed them Poképuffs to increase their affection. Pokémon-Amie itself contains three small games that reward you with PokéPuffs. They’re addictive little timewasters that are similar to the browser games in the Dream World on the Global Link website.

Even with all the flashy new distractions in Pokémon X, it just wouldn’t be as fun to play without the awesome soundtrack, which really rounds out the whole package. The battle themes have enough variety to keep them from getting too repetitive, but the overworld and various town themes are truly a joy to listen to. Most of the game’s tracks would be a great addition to anyone’s playlist, including this catchy one from the power plant and Professor Sycamore’s theme.

From the graphical facelift to vastly improved online features, Pokémon X has definitely brought the series proper into the current handheld generation successfully. There are plenty of new things to experiment with, including battle tweaks and long-overdue character customization, but ultimately, this one sticks to the classic formula in a good way. Some of the controls have even been streamlined for the better, too, so if you liked the old games, you’ll have a blast with this one.