While the 3DS is slowly picking up steam, many gamers have forgotten about the original DS, and for good reason. There has been a lack of significant first or third party titles, and Nintendo didn’t even mention it during their E3 conference this year. Luckily, Professor Layton and the Last Specter has finally been released stateside, and it couldn’t have come at a better time. Though some might find that it doesn’t break new ground, the Last Specter shows that Layton is at the top of its game; and fans and newcomers alike should take notice.

Despite this being the 4th game in the series, The Last Specter is actually the first game chronologically, and marks the start of a new trilogy. We find Layton as a young professor, who is well known, but hasn’t quite reached the reputation he had in the first three games. Layton finds himself in the quaint town of Misthallery, where he has been called by an old friend to solve the mystery of a menacing specter, who has been attacking the town and its citizens at night. The game also reveals how Luke first met Layton, which is a welcome inclusion for long time fans. The plot isn’t complicated or abstruse, and the colorful cast of characters help to pull you into the story, which wraps up with one of the better endings of the series. 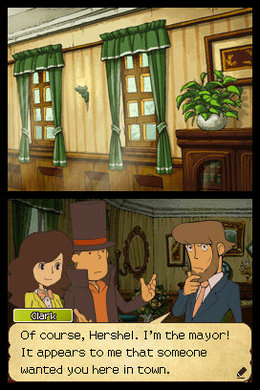 As expected, the game doesn’t break any new ground when it comes to design. Rather, it sticks to the formula that Level-5 has finely tuned over the last few years. As you navigate the environment through a simple point-and-click interface, you will solve puzzles that drive the story forward. While most of the puzzles are presented through situations which aren’t directly connected to the plot, there are many brain teasers that directly relate to the progression of the story. Additionally, the game does a great job of getting you to explore the different areas of Misthallery. Every screen has hidden hint coins, which can be used to lessen the difficulty on puzzles if needed. There are also hidden puzzles and collectibles to be found, though this is old news for Layton veterans.

Layton’s story and gameplay is wonderfully and expertly put together, and the same can be said for the presentation. The graphics make use of a cartoony but detailed style, which make for a gorgeous game. The characters and environments have an undeniable charm that will draw you into the experience, and the fully animated cutscenes are a treat to experience on a handheld. Even the soundtrack is enchanting, with tunes that primarily feature the accordion, which sets a mysterious and whimsical tone which lasts through the whole game. The game also features voice acting, with voice actors who fit their character perfectly. My only complaint is that the game isn’t fully animated or voice acted, but this is most likely caused by the memory limitations of a Nintendo DS cartridge.

While there isn’t much reason to replay the story, Level-5 has gone out of its way to extend the value of the game. Similar to the other entries in the series, weekly puzzles will be released via Nintendo Wi-Fi Connection. While it is not sure how long this will last, the other games had weekly puzzles that lasted for over half a year, so expect a similar time frame. In addition, the game features a completely optional RPG, titled London Life. The RPG has you creating your own character, who has recently moved to London. The game focuses on increasing your character’s happiness and wealth, which can be done from taking on different jobs, completing side quests, and purchasing items such as clothing and furniture. While it is very simple in design, the charming world populated by Layton characters and retro sprites (which were done by Brownie Brown, co-developer of Mother 3) is a nice treat, as it gives you the opportunity to interact with new and old characters alike. 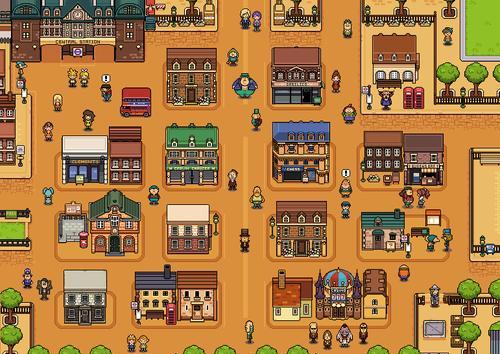 All in all, Professor Layton and the Last Specter is the most expertly crafted game in the series. The exciting story, challenging puzzles, charming presentation and the boat full of extras make for a great game. Even if you missed the first three Layton games, as a prequel, the Last Specter marks the perfect place for new players to start.