Professor Layton and the Miracle Mask marks the puzzle-solving archaeologist’s first adventure on the 3DS. As the second game in a prequel trilogy that started with The Last Specter and the fifth game in the series overall, how well does this one hold up against its predecessors?

In Miracle Mask, the professor receives a letter from an old friend requesting that he investigate a series of strange events in the city of Monte d’Or. There is a mysterious gentleman running around and using the Mask of Chaos to cause these ominous “dark miracles,” so it’s up to Professor Layton, his assistant Emmy, and his apprentice Luke to solve the mystery. The story also cuts back and forth between the present and the professor’s high school days, in which we learn more of Layton’s background and meet his family and childhood friends. The plot is touching and well-written, and for once, Layton saves the day with something believable in the context of the game. However, while the story is definitely one of the best in the series, it doesn’t quite take the top spot because it is also pretty predictable.

Overall, Layton’s transition to the 3DS makes for a visual experience that improves upon the standard set by the first four games. The animated cutscenes are as gorgeous as ever, and the 3D actually enhances them. The new cel-shaded character portraits look excellent as well, but they are a little jarring against the lavishly detailed backgrounds. It doesn’t take too long to get used to it, but when you are just starting the game, the professor and company tend to look a little out of place in their own world when compared to the hand-drawn sprites of previous games.

In addition to good visuals, Miracle Mask has an excellent soundtrack that is one of the best in the series. As usual, the music is full of nice accordion tunes when you are exploring, and when something important is going on, the music shifts to really immerse you in the situation. The voice work is also spot on, and all of the actors do a wonderful job bringing the characters to life. 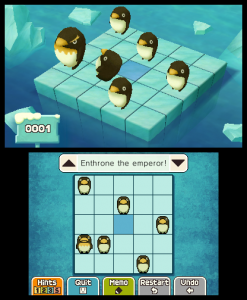 The series has always had solid mechanics, and Miracle Mask makes only minor adjustments that are mostly for the better. For example, you explore Monte d’Or by tapping locations on the map rather than pressing an icon on the screen and choosing a direction to travel, which was the norm for previous games. It’s a tiny change, but it cuts out a step. Puzzle solving still incorporates a handy memo pad so you can take notes, but it receives an upgrade in the form of more writing colors and an undo option. Of course, hint coins are back to help when you get stuck on a particularly pesky puzzle. Speaking of the puzzles, most of them didn’t take advantage of the 3DS’ unique features, though a few did make use of the motion sensor. Overall, the most interesting new element introduced in Miracle Mask was a section of the game where you navigate the professor through an area full of puzzles in a top-down perspective.

The only change in the gameplay that was actually a slight hindrance involves how you interact with your environment. In previous Layton titles, you would tap every single object on the location displayed on the touch screen to discover hidden puzzles, hint coins, and items for the professor’s collection. The system was a bit annoying, but Miracle Mask’s answer is worse. During investigation mode, you can use the stylus to drag a magnifying glass around the screen until it changes color, which means you can interact with something. This takes even longer than just tapping everything, and it actually breaks the 3D visuals: when the focus has to switch from an object in the foreground to something in the background and vice versa, you will often end up seeing two copies of the cursor. 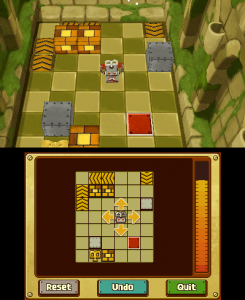 Minigames are another mainstay in the Layton universe, and they have their usual place in the professor’s trunk in Miracle Mask. Unlike some previous ones in the series, all of these are actually fun without being annoying. (I’m looking at you, parrot puzzles from Unwound Future!) One of these brain teasers involves navigating a toy robot through a series of levels. Another is about stocking store shelves based on item type and color, and the last has you helping Luke train an adorable bunny to star in a play. These minigames are great for taking a break from trying to solve puzzles on your first try to get the most picarats.

Ultimately, Professor Layton and the Miracle Mask is a solid entry in the series. It’s already packed with great puzzles, and a year’s worth of daily downloadable brain teasers will only encourage you to keep playing. It has an excellent story that doesn’t take as much of a turn for the insane in the last stretch as previous titles have, and the change is refreshing. The plot does contain one tiny reference to Professor Layton and the Eternal Diva, an anime film that takes place between Last Specter and Miracle Mask, so you may want to watch that before playing. Hopefully, the next Layton game will fix the graphical glitches related to using the 3D and find a better way to let you investigate locations, but regardless, I highly recommend this one to fans of the series and puzzle aficionados in general.