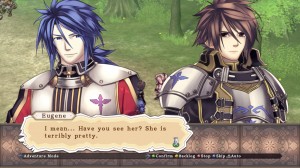 In the first generation, you play Sieghart, a commander in the army, tasked with stopping the advance of a monstrous force. Sieghart gets killed by a Larva (a particularly strong monster) right at the start of the game trying to protect a girl. Lucky for him, the mysterious girl brings him back to life at the cost of some of her powers. It just so happens that the heads of the military and the state are looking for her, and they aren’t happy about her loss of abilities. Your mission then becomes helping her get her powers back while still stopping the monsters from taking over the world. You must collect three materials from across your continent to create a weapon that will stop the evil forces. Along the way, you pick up various party members and fight through fields of monsters. Every once in a while, you get a chance to interact and make dialogue choices that determine the affection levels of some of the women in your party. At the end of Sieghart’s chapter, he chooses one as a wife, and they have a son named Leonis who carries on the family quest. Unfortunately, that’s as far as the Soul Breed system goes in this game. Unlike the first game, which carries through five generations, this one only tells the tale of a father and son. The son’s abilities and weapons are based on a combination of the father and mother. Visiting the Oracle will give you some insight as to the son’s abilities depending on which woman you choose so it’s not a complete surprise what you end up with.  Leonis takes over the father’s quest to save the world, and the materials gathered by the father have been given to the great blacksmith Hass Calinou to forge a sword to stop the evil forces. Unfortunately, if you’re a big fan of story in your games, you can see the plot twists coming from a mile away as certain people once thought to be allies turn to the side of evil.  So, Leonis and company must continue the fight to save the world against stronger evil forces than his father, with the added insult of their enemies once being allies.

If you follow the right sequence of events (give or take a few dialogue choices), you can also unlock a “True Ending” which adds post-game content, but doesn’t take it very seriously. You will fight against some familiar faces and some new ones, but the dialogue is filled with commentary where the characters make fun of the enemies, each other or even the game makers themselves. The point is clearly made that it exists more to thank you for playing and let you fight stronger enemies rather than expand the story. 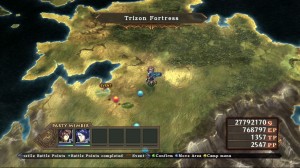 Overall, the story is pretty coherent, though predictable, and the dialogue does mix in some levity throughout. The story is fairly linear, but at various points throughout the game, you’ll be asked to select from 2 or 3 dialogue options. Many of these dialogue choices that determine the overall route your story takes also change how the women in the party feel towards you. Depending on their level of affection, the women will change outfits during dialogue scenes, leading to some rather revealing attire, which should be no surprise from the sequel to this game. You can also unlock certain story sequences where the women are put in some… compromising positions that stretch the limits of the T rating the game received.

Record of Agarest War Zero is shorter than the original, but if you connect this game to the first one’s save file, or beat the game once, you get access to a digest mode of Record of Agarest War, where you can replay the major plot points of the game plus “Extra mode” which ups the battle difficulty without changing the story. The benefit of playing the digest mode story (besides getting a review of the events of the first game) is that you will unlock characters from that game to use in Record of Agarest War Zero. There are certain special attacks that can only be performed with a combination of characters from both games, including some of the strongest attacks available, which you may need to fight some of the bosses in the True Ending.

There are no random battles in Zero. As you move from point to point on the world map, you will fight once at most every place, and you can later return to fight again at your choosing. If you’re a completionist, you’ll have to revisit quite a few battles in order to kill enough monsters and get enough of certain materials to satisfy the title goals. Battles are turn-based and fought on a grid system and controlled in two phases. During the move phase, turn order is determined by agility scores and you move each character individually, then the computer moves the enemies. During the action phase, turn order is primarily determined by the number of action points. On your turn, you can then select the attacks or support actions that you would like your party to perform. You control up to six characters at once during battle, and each one has a different shaped field around them. If other characters are standing in that field, they can team up for attacks. Some of these group attacks are very powerful, and you’ll need them to beat some of the bosses. The first time through, some of the battles can be very difficult and the learning curve may be a little sharp for someone who has never touched a tactical RPG before. There are plenty of DLC packs that you can get that give you weapons, armor and status points, but if you use some of them, the game can become laughably easy instead, especially early on. If you don’t choose to buy DLC, in order to keep your party well equipped, there is an extensive crafting system. Using materials you receive from enemies and ones you create from refining equipment, you can create new weapons, armor, accessories and even attacks and spells. The recipes for these are found in books found in treasure chests for the most part, and you’ll have to keep up to date on your equipment to have a fighting chance in this game. 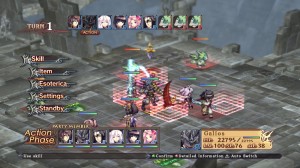 During the battles, you have the option of auto-battling, which is nice for when you just need to farm materials in an area or grind up some levels as it goes much quicker than doing it yourself. What’s not so nice is that the game uses the same AI for your characters as for the enemies, which does not always optimize attacks. While it’s a boon to you when the enemy keeps casting the same spell on someone who is immune to it, you’ll get nowhere fast when the computer makes your team do it. That is perhaps the biggest flaw in the game. The auto-battle will eventually get the job done, but it sure won’t be pretty.

During the dialogue scenes, which are Japanese audio only with English subtitles, the characters are not static like in the original Record of Agarest War, instead employing the moving, breathing drawings seen in Hyperdimension Neptunia or Trinity Universe. If you’re a fan of anime-style graphics, you’ll appreciate the art style. If it’s not your cup of tea, you’ll probably hate most things about this game. The sprites used in battle are a little better quality than the original as well, but again if you’re looking for realism and graphics that push the limits of the system, you’ll have to look elsewhere. That being said, these are some of the best graphics that Idea Factory and company have put out to date. They also did a great job with most of the music. The battle themes get you pumped up to fight and the world map music is suited well, too. Again, though all of the spoken audio in battle is Japanese but without subtitles. However, you really don’t seem to miss out much on that.

The game does have the occasional typo, but nothing that makes it impossible to play. At one point, something in the title list is referred to as a “Magic Crystal Shard” whereas in your inventory it’s called a “Magic Crystal Chip.” This may not seem like a big deal, but when you’re already dealing with four different kinds of needles and a handful of different amulets with similar names, it may lead to you to believe that you need one thing instead of another, but that’s about as bad as it gets.

Record of Agarest War, like many others from Idea Factory, is aimed at more of a niche market. If you have enjoyed other Idea Factory titles and tactical RPGs, this game is going to be right up your alley. If you can’t stand anime-style graphics or a lot of risque humor, you better steer clear of this one. An all-around good game, but it will probably be underestimated by most gamers due to the blatant sexual overtones throughout the game.