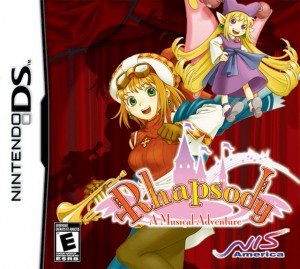 Rhapsody: A Musical Adventure is one of the more interesting games I have picked up lately. Originally released as The Puppet Princess of Marl Kingdom for the PlayStation, the game is the first in the Marl Kingdom series and is the only game in the series to be released outside Japan (so far).  The other games in the series are Little Princess: Marl Ōkoku no Ningyō Hime 2, and Tenshi no Present – Marl Oukoku Monogatari; both of which have fan translation guides should you find a copy of the game.

Some quick points on why I liked this game.

One of the most obvious things that makes Rhapsody unique is that it is a Musical RPG. What exactly does that mean? All the FMV/cutscenes are musical numbers with dancing, and I just happen to like musicals.

The songs are actually quite nice to listen to and are sung in Japanese.  I did find some MP3’s of a few of the songs on File planet (here, here,here).  The PSone version of the game came bundled with the Official Soundtrack which had all the songs sung in English.   The songs are very heartfelt and girly. Of course, that’s to be expected as the whole game is about a young girl trying to find her prince. 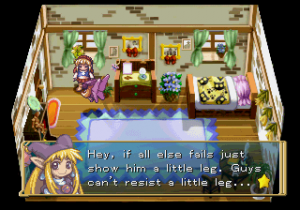 Rhapsody follows the adventures of Cornet, a girl who can talk to puppets, and Kururu, a puppet that has been with Cornet for as long as Cornet can remember.  She has a magical horn that has the power to grant wishes as well as command puppets in battle.  While walking in the forest, they are attacked by a witch who sends a dragon to eat them.   A handsome young man appears out of nowhere to kill the dragon in one blow.  You, of course, have just fallen in love at first sight with your hero, who turns out to be the Prince of Marl Kingdom!  After worrying a bit about social classes, Kururu convinces you to get off your ass and get some beefcake.  That’s when you find out that a Miss America style pageant is being held, and the King has declared that this years winner will be get to wed the prince.  Of course, you win and as you are celebrating at the palace that night the witch from the forest and her friends show up.  The lead witch is a cougar and attempts to cast a love spell on the prince and ends up turning him to stone instead.  In frustration, she steals the prince and returns to her castle in the sky.  You and Kururu then set out on a quest to find the prince and change him back to normal.

It’s your standard JRPG scenario with the exception that it’s a girl going out to save a guy.  Due to the switch in genders, you do get a different feel to the interaction with other characters. Especially the interaction between Cornet and  Etoile Rosenqueen, Cornet’s friend and rival.  I’m sure the guys reading this have seen this scenario, and any girls reading might be in this scenario.  Two girls that seem to hate each other, are all catty, yet still hang out together and call each other friend.  That’s pretty much their relationship.  I know. I don’t get it either. The overall theme is girl power, as the main character, your human allies, and all of the villains are girls. All of them are strong, and none of them are slutted out (okay, maybe the cougar a little bit but not much).  You will see some emotional sides but not a single one of them is made to be a damsel in distress.  Really it’s not often you see a female character in a game who’s not there simply as eye candy.  And yes I enjoy eye candy too, but if I just wanted to look at scantily clad ladies there are better options on the internet.

Changes from the PlayStation to DS Versions

Rhapsody has changed a bit from it’s PSone roots.  The strategy/tactical battles and difficulty level selection has been removed for a standard 2D turn-based battle system similar to the ones found in the sequels.   Kururu was not a playable character in the original game, but is playable in the DS version.  I kept her in the party for the majority of the game as she is quite the powerhouse.   There was also a side quest in the 3rd game of the series that involved Cornet and Kururu that has been integrated into the DS version.  Extra quests that were available in the 2nd Japanese release (a director’s cut) were not included in DS release due to “localization issues”. 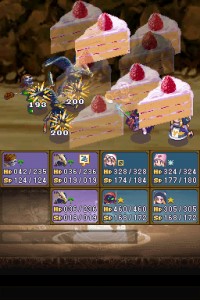 I’ll just be blunt.  The difficulty and play mechanics make Rhapsody “Baby’s First RPG.”  If you’ve ever played a turn based JRPG, then the controls will be quite familiar. The selections are basic: Attack, Defend, Magic, Items.  Only 4 characters can be in the active party with Cornet being mandatory.  All status effects reset at the end of battle; so, you don’t have to worry about running back to town because you forgot antidotes.  All the puppets not currently in your party will gain experience at half the rate of those in the active party; however, some of the special attacks for the puppets are only learned by being in the active party so it’s a good idea to switch them out every once in a while.  I found grinding was only necessary in the optional dungeon.  This is because the boss fight happens only if 3 specific Puppets are in the active party, and I had not been using them at all so they were under leveled for that particular fight.  Overall, my completion time was 12 hours.  The general standard on RPGs today is around 40 hours; so, it is really short, but the game is available brand new from Gamestop for $10 so the price matches the length of play. Also, the dungeon layouts are not very complicated, but generally, it’s worth checking out every passageway for loot.

The game takes advantage of the dual screen of the DS.  The top screen displays the map at all times and while the action takes place in the bottom screen.  While you can control the entire game from the touch screen with the stylus, you can also play it in button-only mode, which is how I played it. Rhapsody also uses the microphone as part of a mini-game.  You can earn money by playing your horn at specific places in every town.  To play the horn you blow air at the DS microphone which moves a cursor across a bar from red to green space.  The longer you can keep the cursor in the green the more better you played so the more money you make.  I typically had to take two breaths during the course of each play.  It was definitely a unique experience, but not one I would do in public (you get some weird looks).  It nets you enough money that you could use it pay for all your items but i found it was really only necessary if you were a few hundred short as it’s just easier to fight monsters so you can gain money and exp at the same time.

Part of the cuteness of the game is in the special attacks that Cornet has.  These include cakes, flan, and pancake attacks.  Yes, a giant stack of pancakes will crush the enemies! As I mentioned earlier it is a Musical RPG.  The plot and cut scenes often contain song and dance which were quite enjoyable and I wouldn’t mind seeing this style of presentation be used more often in games.    When such songs take place, the vocals were in Japanese with English subtitles so you won’t miss out on what’s going on.  All of the songs and cut scenes can be replayed from the main menu once they have been unlocked.

Rhapsody’s influence has extended into Nippon Ichi’s subsequent series of tactical role-playing games.  One of the characters of La Pucelle: Tactics is a descendant of the characters in the game (so, while it technically it takes place in Marl Kingdom, it is considered a separate series), while shops named after Cornet’s rival, Etoile Rosenqueen, can be found in other NIS games including Disgaea: Hour of Darkness.

Rhapsody’s lighthearted approach, unique presentation, and distinctly female perspective are a refreshing change from the standard fare that has become the JRPG (and most Western RPGs as well).  While the game is short, it has a price to match so I would definitely recommend everyone play this game.   File under Keep it!