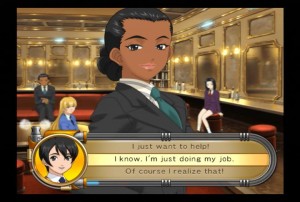 Sega has been producing the Sakura Wars game series in Japan for almost 15 years, but not one found its way to a North American release until now. Sakura Wars: So Long, My Love, the fifth game in the series, was originally released in Japan in 2005, but last year NIS America finally stepped up to the plate and undertook the task of localizing it. So, was the dating-sim-meets-tactical-RPG worth the wait?

Sakura Wars: So Long, My Love takes place in New York City during a more steampunk version of the Roaring 20’s, 1928 to be exact. You play as Shinjiro Taiga, nephew to Commander Ichiro Ogami from the other Sakura Wars games. Fresh out of the academy, Ogami sends you to a post with the newly formed New York Combat Revue, a group of skilled fighters disguised as an acting troupe at the Littlelip Theater. Much to the Revue’s dismay; however, you’re not the combat veteran they were hoping could lead them into battle. The game is broken into seven chapters, each with their own subplots and villains. The way the battles play out, along with the interstitals between chapters, gives the game an episodic feel like a Sentai TV show. Each chapter consists of a mix of events at the Littlelip Theater, your home base, exploring the city, talking to your teammates and fellow New Yorkers, some battling and eventually a boss fight. Your job is to lead your troops into battle against the forces of evil and earn their trust as captain all while balancing the relationships of your teammates.

That’s where the dating sim aspect of the game come in. As Taiga, you must earn the trust and respect of the rest of the team during the conversation and exploration modes because their motivation and faith in you directly translate to their battle prowess. During conversations, Sakura Wars employs the Live & Interactive Picture System or LIPS, giving you some control over the flow and direction of dialogue. During conversations, you are often given a timed set of choices for responses, referred to as “Normal LIPS”, some of which will improve the relationship between the characters and some that will worsen them. There is also the oft-forgotten option of not responding at all and letting the timer run out, which is not something you can do in many games. The choice to stay silent can sometimes be the best way to diffuse a problematic situation and keep Taiga from digging himself into deeper holes. There is also “Stick LIPS” where you use the analog stick to raise or lower a meter that indicates the intensity of a response, giving you the option to respond anywhere from yelling at the top of your lungs or barely whispering. The game also uses “Analog LIPS” for more action-oriented situations, such as preparing food and repairing electronics, where one or both analog sticks must be pushed or rotated according to on-screen prompts to complete a task. There are also extended situations where you must do multiple LIPS actions at a time, referred to as “Double LIPS.” All of these mechanics combine to keep you on your toes as they are essentially a Quick Time Event system during conversations, and since the game is quite conversation-heavy, it’s a fun way to change things up. 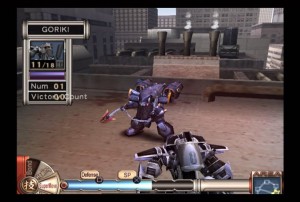 Battles are where your STARs (Super Telekinetic Assault Robot) begin to shine, with each of your team members piloting one of these giant robots. There are two battle modes, land and air, but both are fought in a turn-based tactical style. After the first battle, you have control over all the units on your side, moving them across the field, attacking, healing and charging as necessary. The battles are fought on a grid-less system where all actions and movements cost you mobility points. Your characters also each have a skill point gauge that fills from receiving damage or charging up. Combinations of move and skill points can be spent to execute joint attacks, heal or perform super moves, each with their own character-specific cutscene. The basics of the system are pretty simple to learn; once in battle, the challenge comes from knowing when to switch from an offense to defensive strategy and when to call for backup. The real challenge of the battle system, though, is making sure that you’re on good terms with all the girls on your team. Their increased motivation and affinity towards Taiga translate to improved strength, higher damage during joint attacks and even extra moves, which can be crucial in the boss battles. You can also help develop the camaraderie between the girls, which translates to improved team attacks that don’t include the leader.

When you’re not battling or talking, you’ll be exploring the Big Apple. You take control of Taiga as he walks around the streets of New York. There is an overview map that lets you choose which sections of the city to enter such as Harlem, Midtown, The Village, etc. Once inside, you can walk up and down a few streets and enter the various stores and apartments. With the exception of a few instances, each interaction will count off five or ten minutes on your pocket watch in the upper-left corner. As a member of the theater troupe, you’re often required to be back in time to help prepare for the show; so, as nice as it is to wander around, you do need to keep an eye on your time. During this mode, you also have the chance to take pictures of people and places using your Camratron. Some of these can be traded to Cherry for bonus pictures of your teammates.

What really makes this game enjoyable are the characters and your interactions with them. Superficially, many of them fit into common anime archetypes, but as you interact with them and become closer, you find out that there is more to them than meets the eye. The New York Combat Revue is a motley crew of actresses from around the world. There’s Cheiron (pronounced Karen) Archer, the hard-nosed Harlem lawyer who has a soft spot for kids and Gemini Sunrise, the cheerful cowgirl-samurai from Texas. Mix in the enigmatic Subaru Kujo, the fiery child bounty hunter Rosarita Aries and Commander Sunnyside, one of the richest and most unusual men in New York, and there’s plenty of personality to go around.

Graphically, you can tell the game isn’t the newest production, but it still looks decent. The anime style cutscenes and character pictures during dialogue look great. Even during static dialogues, the characters still blink, move their mouths and show a variety of reactions, something that should be more common in these games. However, the mouths are still synchronized to the Japanese dialogue; so, if you’re playing in English, there are some noticeable timing differences. During the scenes that use 3D models, you can see some minor graphical flaws, and they do reuse the same pre-battle animations quite a bit. I also noticed that when playing some of the cutscenes on my PS3 that uses software emulation of PS2, there were some small catches in the video, but the PS2 didn’t have the same issue. So, while it’s not an issue with the game, but it is something to be aware of. Of course, minor issues like that can be overlooked when you’re rewarded with a scene of a gigantic slingshot launching a plane into the air in the middle of Manhattan.

The music for the game is fantastic, the jazzy style really captures the essence of New York in the 1920’s. The game even has a “cameo” by Satchmo himself, Louis Armstrong. The scores are lighthearted and fun and provide another level of energy to the game. There are also fun little chime noises that play during conversation when you make a good or bad decision, letting you know just how much trouble you’re getting yourself into. The voice acting is pretty good all around. While the Wii version features English-only voice actors, the PS2 version has separate discs for English and Japanese voices, which should tell you just how much dialogue there is. There are no credits listed for the English voices, but don’t let that make you think they weren’t worth crediting. Gemini Sunrise sounds like a less annoying version of Ulrika from Mana Khemia 2, leading me to believe that she’s played by Laura Bailey. Rosarita’s actress does a great job of making her sound like the cute, rambunctious kid that she is without letting it get annoying, while Sunnyside sounds like the fun-loving eccentric that he is. It’s a great cast all around.

If you enjoy visual novels and dating sims, but don’t speak Japanese, you’ll probably love the chance to finally play Sakura Wars in English. The tactical RPG battles are good, but more of a garnish to a great visual novel, and the graphics aren’t jaw-dropping HD. Most importantly, though, Sakura Wars: So Long, My Love is just fun to play, and that’s something that I wish I saw more of in next-gen games. The game also presents quite a bit of replay value because all of the dialogue paths and exploration choices result in different partners and change your strengths and weaknesses. A definite keeper, and hopefully we can see the rest of the series here someday, too.