Billed as the spiritual successor to Alpha Centauri, fans of the Sid Meier’s Civilization franchise have been waiting for a return to space with bated breath. While making Ghandi into a warmongering nuclear threat is fun, there’s just something special about venturing out into the vast unknown and conquering a whole, new world (a new, fantastic point of view, perhaps?). [Editor’s note: No one will tell you no, Dan.] Fifteen years later, Firaxis has finally released another Civilization in space, touting some new features not seen in a Civilization game before. Do the new quests, alignments, and tech web lift this game to the stars, or does it burn up on re-entry?

Like all other Civ games, Beyond Earth is a traditional, turn-based 4x title (explore, expand, exploit, exterminate). However, instead of leading a country to glory, you start the game by selecting a sponsoring organization and a spaceship that helps fund your work. Each has its strengths and weaknesses, but it is mostly a cosmetic difference from the traditional setup (other than having far fewer options). Nonetheless, once it starts, Civ fans will feel right at home; on new world you are granted your starter city and basic exploration troops. From there, your goal is to explore the terrain, looking for suitable places to expand your reach based on the different resources available nearby. Instead of barbarians, though, the lands and seas are filled with all manner of aliens, from insectoids to kraken to siege worms that would make Kevin Bacon run for his life. But you’re also not the only humans on the planet; as you play more and more, AI teams will drop in, settling in various areas near and far, making those early turns vital as it determines just how much of a head start you can build. Unfortunately, you’re pretty much on your own there. While the game offers you tutorial suggestions at low difficulty levels, Beyond Earth lacks the advisor system of the traditional Civ games. 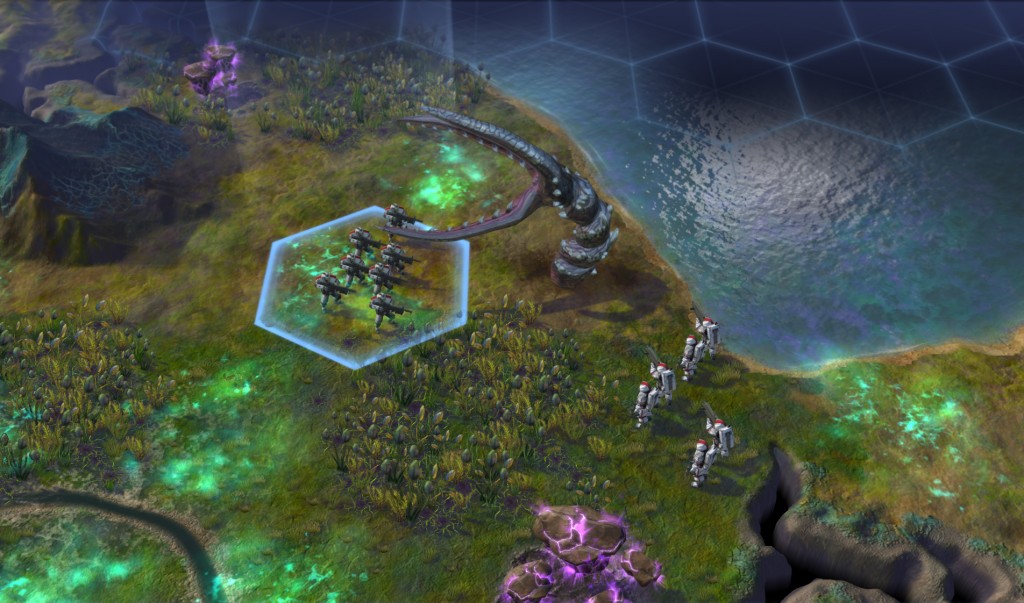 One of the biggest differences you’ll notice is that when you send out colonists, they no longer just pop up a city when you build. While in Civ 5, Rome could be built in a day, the same is not true here–Outposts take several turns to set up and turn into a city, meaning you can’t just colonist-spam early on. The game offers a wide variety of difficulty levels, and these help determine just how aggressive the AI is with both their expansion and attacking. On the lower levels, most of the factions are buddy-buddy, though repeatedly encroaching on another’s territory will eventually lead to war. On the highest difficulties, you have to be much more strategic and judicious with your planning, as factions can easily run you over without a second thought.

Expanding the mind has always been as important as expanding territory in Civ games, and that still holds true here. However, the tech tree has been replaced by the more visually confusing technology web, though it’s pretty easy to learn how it works. Each node on the web has a major technology to research, with a pair of subspecialties underneath it. Once you research the main concept, you are free to either research the subspecialties or leave them for later and research another node. Early technologies feel like familiar concepts, like social engineering and biology (Though I don’t understand why they have to research the laws of physics again. This is a new planet, not a new universe), but later ones begin to integrate futuristic technology or alien knowledge into them. 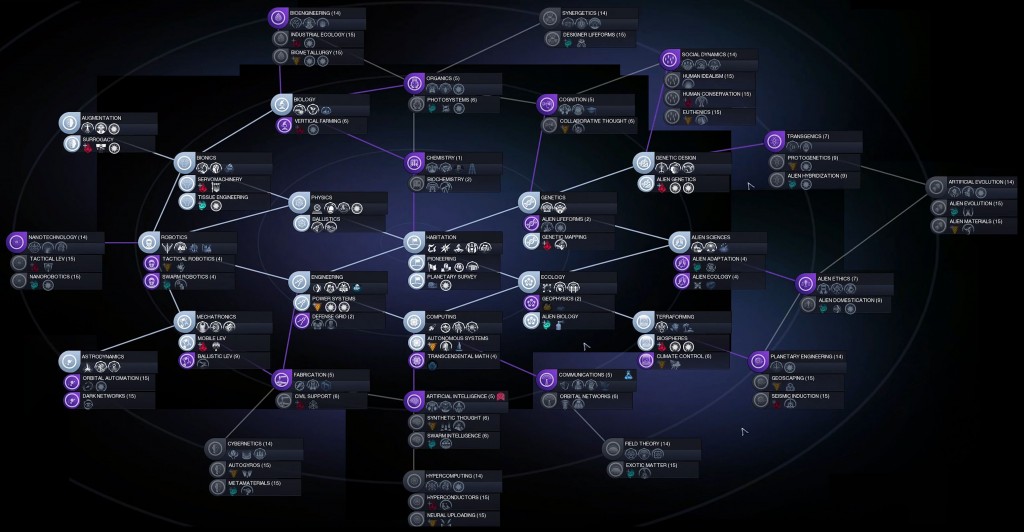 Different areas of research coincide with different alignments: Purity, Harmony, Superiority. Each of these leads down a different victory path. Purity seeks to turn this new land into the next Earth and keep everything as human and familiar as possible . Harmony wants to become one with the planet, allowing access to creating alien life of your own and allowing your troops to become stronger in the presence of the planet’s poisonous miasma. Superiority seeks to blend man and machine, creating the most efficient and effective society ever, sacrificing some of the humanity of the people for the sake of power. Each of these paths unlocks a different alternate victory condition, in addition to the old standard domination and a new non-affinity condition where you track down an ancient alien communication signal. Victory seems like it requires considerably more forethought than previous games, as it is nigh impossible to jump from one affinity to another mid-game without setting yourself far behind, and once the competition begins to expand, it makes it much more difficult to dominate all of them just due to sheer volume. That level of planning ahead for how you want to win wasn’t as integral in other Civ games, so there may be a bit of an adjustment period.

As you explore, build and research your way towards victory, you’ll frequently be presented with various “quests.” Some are simple as making a decision about how to use a building’s extra resources; others are more extensive, requiring multiple steps to complete, like sending a spy to a certain city and performing various actions. Different actions have different difficulty levels, which determine the likelihood of success, and likewise, the value of the rewards varies with the difficulty. Choosing to devote a newly built research facility to civilians improves heath, but doing a drawn out mission might reward you with free, new technology. They add a little something extra to the game, though rarely if ever will their rewards turn the tide one way or another.

Graphically, the game sports a great opening cinematic, setting the stage for colonization. Beyond that, the graphics are good but won’t wow you; however, it is neat to watch the transformation troops undergo as they are influenced by the different affinities. There are clear visual distinctions between Purity soldiers, who retain their humanity, and those under the banners of Harmony or Superiority.The UI could use some minor reorganization, but is still workable, though I did grow tired of having to switch back and forth between the orbital view for launching satellites and the normal map. The soundtrack is dynamic–flowing and crescendoing with the events of the game, grandiose as action looms while dwindling away during peaceful times. While there is no “Baba Yetu” that will likely grab all the music awards, this is a soundtrack as great as any in the series.

Civilization: Beyond Earth manages to feel, mechanically, like a heavily-modded Civ 5 game at times, but the new approach definitely gives it its own identity, or at least the start of one. Like every Civ release, there is room to grow that will be addressed with expansions, but even now it certainly deserves its place amongst the pantheon of Civilizations past as a worthy successor to Alpha Centauri.  There’s enough different here to make most Civ fans happy, but enough the same that it’s not as alien as the native life you’ll encounter.