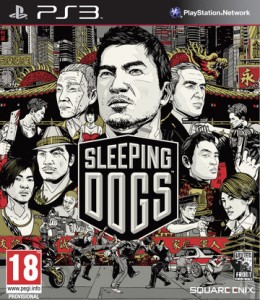 True Crime has been a loved franchise. An open world game with a cop as a protagonist provides interesting dynamics with regards to how you choose to complete your missions — with minimum casualties or maximum, unabashed carnage. With Activision shelving it, True Crime: Hong Kong seemed to be heading toward a certain doom. But thankfully, Square Enix  decided to revive it under the new moniker Sleeping Dogs, as not only is Sleeping Dogs a great open world action game, it most certainly is one of the best action games this year, so far.

A lot of modern games seem to halt at a critical crossroad where they tend to choose gameplay and/or visuals over a half-decent storyline. Thankfully, United Front Games takes the high road here, delivering a hugely impactful and satisfying story filled with interesting, volatile and memorable characters. You play as Wei Shen, a hard-boiled undercover cop who moves from New York to Hong Kong trying to run from his troubled past and take down the Triads, or the Sun On Yee, from the inside. But he eventually begins questioning his motives and his loyalties. He finds that the police are just as dirty as the Triads, and it begins to blur the lines between his duty as a cop and his duty as an honest human being. The journey is peppered with some interesting moments of choices, revelations and relentless violence. All of this can be accounted to the great writing and fantastic characters. Even though the characters are named weirdly – Two Chin Tsao, Broken Nose Jiang, Big Smile Lee, you get the gist – that doesn’t stop them from being surprisingly deep and unpredictable. And the characters in turn, are brought to life with some of the best voice acting you are likely to see. With a stellar star cast like Will Yun Lee (Wei Shen), Edison Chen (Jackie Ma, Shen’s childhood friend) and even Lucy Liu and Emma Stone making appearances, Sleeping Dogs towers above the rest. An authentic mixture of Cantonese and English also helps here. The performances are heart-felt and the writing believable, making it a satisfying affair.

A game can be great either if it does something impressively original, or if it incorporates elements which received acclaim in previously released titles. Sleeping Dogs walks a thin line between these two categories. While setting you loose in the richly diverse cultural playground of Hong Kong, which comes as a breath of fresh air, it also sports a widely varying gameplay style taking cues from immensely successful titles: Assassin’s Creed’s free running system, Batman Arkham Asylum’s counter-centric melee combat, Grand Theft Auto’s open world mission structure, and Just Cause’s vehicle jacking. All these elements tie in really well, with the combat being absolutely amazing. It starts out simple enough: you get to play with kicks, punches and grabs but eventually you can unlock complex moves and pull off devastating combos. And I use the word ‘devastating’ here because it truly is. You can break legs and arms, perform elbow smashes, all of which end in a crunchy bone-smacking sound and a painful wincing which makes you feel like a true badass. The brutally gory environmental takedowns are, however, what take the cake. Once you grab an enemy you can perform numerous takedowns with any of the flashing objects. You can impale foes on swordfish heads, incinerate them in boilers, saw their heads off on a buzz-saw table, and a lot more. There is an element of reality at play here; you can take significant damage from normal punches and blood cakes up on your face as a battle progresses, so that makes the combat feel so much more satisfying.

The cover-based shooting sections are quite limited in the game. You won’t get a gun until the first 4-5 hours, but when you do it is a blast.  Vaulting over cover lets you slow time and kill enemies in style. You can even chain kills to extend the time slowdown. Overall, it feels pretty fantastic. The driving in the game feels breezy, arcade-y and it is an absolute pleasure. The free running feels great as well, as it should since parkour is an integral element to most of the missions in the game.

As far as the content, Sleeping Dogs lasts anywhere from 12-15 hours. The storyline can be completed in just about 10 hours, but the ridiculously large number of side quests will keep you busy for a long time. There are drug busts and favours to complete, races to partake in, gambling to indulge in and cockfights to bet on, and a myriad of hugely enjoyable mini-games. There are hundreds of collectibles to find, as well. These come in the form of lockboxes which contain cash and the occasional clothing item, jade statues which can be returned at the martial arts school to learn new moves, and even health shrines, praying at 5 of which increases the max health by 10% each time. There are nearly 15-20 health shrines and 30-40 lockboxes in each of the 4 regions of the map.

The leveling-up system is quite ingenious. You gain Triad XP for performing violent actions like killing enemies or destroying enemy vehicles, but on the other hand, damaging public property and hurting innocents can knock off your Cop points which ultimately reduce the amount of Cop XP gained. Leveling up as a Triad or a Cop lets you unlock different perks pertaining to each of these sections. Then there is the Face XP, which is gained by completing odd jobs or favours and as you level up your Face meter, you gain different generally applicable perks at each level. You can also dress up, and wearing a complete set of some clothes awards you additional XP on each mission. All of this ultimately makes you feel like every action performed has a ramification, just like it actually should, and Sleeping Dogs wins extra points in that regard.

Jumping over to the technical department, Sleeping Dogs suffers justifiably here. With such a huge scope and a varying open world, Sleeping Dogs is not an extremely pretty game, though the art direction is impressive. A few lead characters look good, and so do the vehicles and weapons, but the rest of the models look uninspired. Some animations are stiff – though the combat animations are pretty good – , and sometimes the NPCs seemed to get stuck in a loop, which was jarring. The camera, too, is a big problem, as it more often that not spins out of control in tight spaces. A little more polish would have been welcome, but with such a huge world to create, all these shortcomings can be forgiven easily. But the painful attention to detail is just staggering, and more than makes up for it.

The sound design is excellent. Right from the track that welcomes you into its hand-drawn, dragon tattooed menu to the various radio stations which play oriental-themed jazz to an occasional rock song, Sleeping Dogs is a good sounding game.

With so many elements at play, Sleeping Dogs could have easily gone haywire. But United Front cages up all these elements with such excellence that the end product is something that’ll truly excite you. With a memorable story and characters, widely varying but spot-on gameplay, great sound design, Sleeping Dogs and the meticulously crafted world of Hong Kong it is set in will stay with you long after you complete the campaign.