Steel Diver is really 3 games on one cartridge with “Mission Mode”, “Periscope Strike”, and “Steel Commander”. 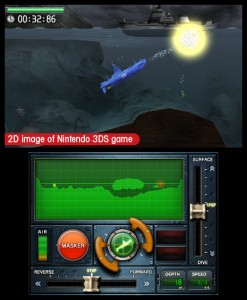 Mission Mode consists of a series of basic missions that are really nothing more than “enemy base is there, get to it through here”.  The “story” never gets deeper than that.  They might as well have just not bothered even going that far.  The levels are big obstacle courses laid out in a side scrolling fashion.  The 3D only pushes the background into the distance, with a few obstacles coming out from there.  For example, in one level, you see an underwater volcano erupting and you have to dodge the large rocks that have been spewed out.

To control the boats you use the stylus to move 3 control units on the lower screen (2 for the small sub).  A speed slider at the bottom of the screen, a depth slider on the right side, and a pitch wheel in the center (the small sub doesn’t have a pitch wheel).  The bottom screen also contains a mini map of the play area.  You can zoom in on the immediate area or show the whole stage.  Then there are icons for the torpedoes, countermeasures, HP, and Air supply.

The actual game play consists of running the obstacle course.  The terrain itself causes damage if you run into it, and mines are scattered about in some levels.  Surface ships are dropping depth charges, and submarines are firing torpedoes.  You can simply avoid the dangers by moving around them, or in the case of torpedoes you can use “counter measures” that break their lock on your ship.  When you fire a torpedo, there is a short reload time, so you can’t fire randomly and expect to survive.  Luckily, if you are hit it still takes several attacks to be destroyed.  After the first hit, a water leak will be seen on the control panel which you have to tap with the stylus until it is repaired.  Until this repair is done you will be unable to use anything on the control panel.  Counter measures use up your air supply by making a bubble turbulence around the boat that causes the lock on of enemy torpedoes to fail.  Surfacing the boat will cause the air supply to refill and will raise your ship’s HP back to full.

As you play the game you can win badges by performing challenges.  In typical Nintendo fashion, they don’t come right out and say “Destroy all the battleships to get this badge”.  You stumble across them as you play.  The badges can then be applied to you submarine to increase HP, top speed, etc.  There are dozens of badges you can earn, but I never used any of the badges.  I actually forgot they were there until I started writing the review, and  I never found the levels to be hard enough to need them.

Periscope Strike and Steel Commander mode are where you see the game really taking advantage of not just the 3D but also the internal gyroscope that come with the 3DS.

This mode takes place in a First person view of the periscope.  While all the controls can be made with the stylus, the fun part of this mode is that you can turn your view by turning yourself.  Yes you will look silly turning in circles when you play but it is such a fun way to play.   You fire your torpedoes with the A button.  When you are hit you spring a leak that must be repaired just like in Mission Mode.

Through the periscope you will see about 12-15 surface ships of varying size.  They are all  attacking at the same time, and you are given 2 minutes to sink them all.  Now with the 3D view you have to take distance into account when you fire as your targets are not stationary, and you will miss if you fire at where they are and not at where they will be. 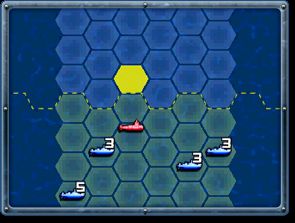 Steel Commander is a “Battleship” style game for 2 players.  You can play off one cartridge but both players must have a 3DS.  You chose from preset starting deployments of your ships. You start with 11 Battle ship/Frigates, 1 Submarine, and 1 Supply vessel.  The goal is to Destroy the enemy submarine or their supply vessel.  The board is divided in the center.  Only the submarine can enter the enemies side of the board.  On each turn you can move one set of ships.  Each ship type has its own movement speed.  If the enemy sub is on a space close to one of your ships, a ring of <?> will form around the ship as you chose them.  You can use the <?> from several ships to deduce where the enemy sub is hiding.   If you land on a space that contains an enemy vessel then combat happens.  Whoever controls the ships will drop depth charges at 50, 100, or 150m. You only pick one.  Whoever controls the sub picks a depth to hide at.  If they match the sub takes damage.  Then the sub gets a chance to attack.  While the  ships only get one chance the sub gets 4 torpedoes. These torpedoes are not weakened so assuming you are good at aiming the advantage always goes to the submarine.

Steel Diver is a fun distraction.   Mission mode was a little disappointing as the levels were too easy.  Steel Commander works great on the go, and was a very fun twist on the Battleship game system.  Periscope mode is a blast to play but is best left for playing at home.  For a launch title it’s not a bad choice to pick up, but I would recommend waiting for a sale.  The current list price is $40.  At that price, it’s a Trade It.   I would wait until it hits $20.  Well worth keeping at that point.