I’ll be honest. A few hours into Super Mario 3D Land, I wasn’t impressed, and I was almost ready to write the game off. It has some control issues, the levels can be all too easy, and the game relies on some power-ups too often. But as I pressed on, the game began to grow on me. Sure it isn’t perfect, but it’s still a good game, and stands out as one of the better titles on the 3DS.

So, surprise surprise, Bowser has kidnapped Peach again, and it’s up to the portly plumber to save the day. This is the main motivation to trek through the 8 worlds on your way to Bowser, but have we ever really needed any other reason to jump, flip and stomp our way to victory? The story won’t win any awards, but the level design stands out as a high mark for the series. Although you are given full analog control of Mario, most of the levels are akin to the 2D side-scroller Mario titles with a little bit of Z-axis control thrown in for good measure. The worlds run the gamut of environments, with mountain, ice, fire levels being some of the level themes. While this might sound stale, Nintendo has thrown in some cool levels which pay homage to other games. In one level, the camera switches to a top-down perspective à la Legend of Zelda, with torch puzzles and sound effects to boot. 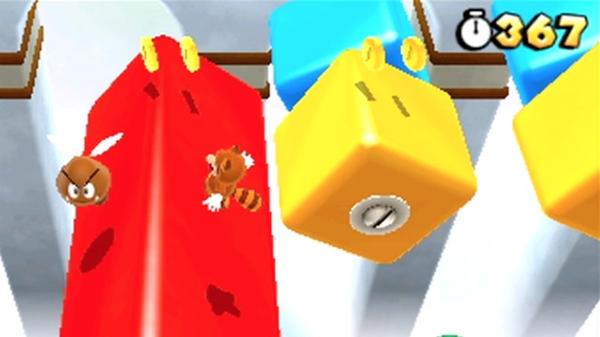 The graphics complement the level design perfectly. The game is not a powerhouse by any means, but the art assets and textures are very clean and simple, and the animations are very fluid, making it the best looking game on the system to date. The 3D in the game is some of the best on the system. The game plays around with camera angles and perspectives to create some interesting puzzles, where stepping on a switch will reveal hidden Star Coins (more on those later). However, the 3D shines when you are moving Mario into/out of the screen, where the 3D effect is used to create a realistic sense of depth. The tunes aren’t as memorable as those featured in Super Mario Galaxy or New Super Mario Bros. Wii, but the main theme stands out from other Mario songs, and don’t be surprised if you find yourself whistling some of the music throughout your day.

In terms of gameplay, this is the same tried-and-true running and jumping that you’ve been playing for years. If you’re new to the series, here’s a quick recap. You’ll control Mario throughout 8 worlds, dodging obstacles, defeating enemies and reaching the end-of-the-level flagpole. Power-ups are back, with the fire flower and mushroom returning as standbys. The game does include some new items; a boomerang suit allows Mario to toss boomerangs to defeat enemies and pick up items. My favorite item is the Tanooki Suit, which makes its first appearance (in more than 20 years) since Super Mario Bros. 3. While you can use these power-ups to take care of pesky enemies, you’ll have to use them to nab Star Coins. Each level in Super Mario 3D Land features 3 Star Coins, which are hidden in secret areas and behind environmental obstacles. While Star Coins were optional in other games, you will need to collect them in order to unlock levels throughout the game. To unlock some of these star coins, Mario will take control of binoculars, which you control with the 3DS gyroscope controls, which work well and add some variety to the game. While I have always preferred the “secret exit” mechanic in Super Mario World, the Star Coins serve their purpose well. If you’re not a completionist, backtracking through old levels to mop up remaining Star Coins might be a burden, but you’ll want to collect them all to unlock later levels. 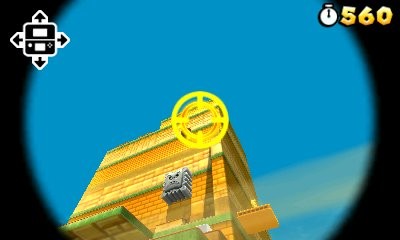 Speaking of later levels, while the “main game” has 8 worlds, there is a set of 8 special worlds that unlock after rescuing Peach. These 8 special worlds offer a significant increase in difficulty, and will test the most experienced Mario veterans. While this may sound like players of all skill levels will have something to enjoy, it serves to highlight some of the core problems with the game. Unfortunately, the game is not very well balanced, with the first 8 worlds being way too easy, with a sudden spike in difficulty with the 8 special worlds. This makes the first half of the game quite boring, and if you have played your fair share of Mario games, don’t be surprised if you rarely feel challenged for the first couple of hours. The balancing issues extend to the power-ups and the controls as well. The power-ups aren’t over or underpowered in any way, but the game relies on the Tanooki Suit too often in order to snag an illusive Star Coin or reach the top of the flagpole.  This relegates these challenges to simply storing a Tanooki Suit in your “backup” power-up slot. While the controls for the game aren’t broken (as a matter of fact, the controls are tight and responsive), this is the first Mario game that features both a run and crouch button. This creates some issues when trying to pull off special moves. For example, in previous Mario games, running and crouching would pull of a long-jump. However, in Super Mario 3D Land, you cannot run unless you hold the run button, so executing a long-jump requires you to hold the run button while tapping the crouch and jump buttons. The game would have benefited from removing the run button, and having Mario run by using the slide pad/analog stick (like in every other 3D Mario game).

Everyone seems to ask whether Super Mario 3D Land makes owning a 3DS worthwhile. I don’t know whether I would call it a killer app, as the first few hours offer very little challenge and don’t prepare you for the trials and tribulations of the special worlds, but if you own a 3DS, or you are looking for another reason to pick one up, definitely pick up Super Mario 3D Land.