The original Wii release of Tales of Graces was not localized in North America, but Namco Bandai decided to bring over the upgraded PS3 version Tales of Graces f. The “f” in the title is short for “future,” a reference to the epilogue added to the game. Along with the additional storyline, there are new sidequests, upgraded graphics and other tidbits. So are these upgrades enough to continue the improvements seen in the last few Tales games?

The story begins with a young child named Asbel Lhant, the adventurous and sometimes irreverent son of the local lord. While exploring a nearby meadow full of flowers, Asbel and his little brother Hubert find a young girl asleep. She has no name and no memory, so the boys decide to take her home to try to help her. Their friend Cheria is the first to see them back in town, and though she is sickly, she still manages to berate the boys for leaving her behind. Asbel’s father isn’t any happier to see that they’ve ventured off and returned with the mystery girl either. He doesn’t have time to deal with them as Prince Richard is on his way to stay with the Lhant family for a while. Lord Aston decides to send the girl away, but before that happens, Asbel, Richard and the mystery girl, whom they decide to call Sophie, decide to sneak out for a while. And so begins the story that will tear apart this group of childhood friends and eventually bring them together once again. After a few more events, the childhood saga of Asbel and friends draws to a close, and the story rejoins Asbel, now a young adult at the the knight academy in the capital. Eventually, he once again meets up with his childhood friends, who have all changed in their own way, along with a few new comrades-in-arms. Their journey to keep the world safe will take them to every corner of the planet and then some, eventually leading to a final battle against one of the most intriguing villains in JRPG history. 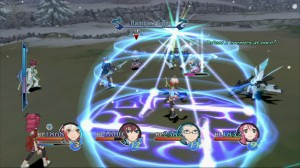 After the original ending of Tales of Graces f, you have the chance to play the “Lineage & Legacies” mode, an epilogue that takes place six months after the game’s main story ends. In this mode, the crew reunites for one more adventure that ties up quite a few threads left undone by the main story. The additional 8-10 hours of gameplay is a nice addition and one that definitely improves the game’s value. Tales of Graces f, like other Tales games, also offers a “grade shop” when you go to New Game+ mode. Throughout the game, you earn grade points depending on whether you do things like fill out the discovery book and bestiary, complete certain challenges in battle, or beat the game on a certain difficulty level. With these points, you can choose to make life easier by doing things like increasing the amount of XP gained on your next play through or carrying over titles and skills you’ve already learned or put yourself at a disadvantage by decreasing the amount of XP and skill points gained per battle.

While Asbel is technically the protagonist of the game, the beauty of Tales of Graces f is that you can use any party member to take the lead. If another of your members is leading the party, when you interact with people or objects in the environment, you can sometimes get different messages or conversations. One of the nice things about Tales of Graces f is that each of the party members gets pretty thorough development if you go through the sidequests and skit conversations you find along the way. Every character in your party gets a pretty thorough backstory to explain who they are when you meet up with them, and most of them go through some further development as you head towards the end of the game. Up until the very end, Asbel is arguably the one who changes the least from when you first meet him in childhood; the other children each go through some pretty dramatic shifts in personality as adults. While the changes are pretty drastic in some cases, the game does a good job of justifying why they happened. 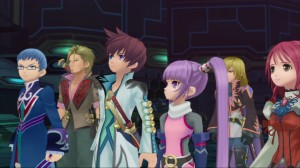 No matter who leads your party, you’ll spend much of your time running around in the fields and towns. Until the end of the game when you can do some quick-traveling, your main modes of transportation are on foot, running from place to place or via the Turtlez transports which will generally only take you to the next closest town. Out in the field, you can see the monsters in the area roaming around; so you can choose to fight them or try to avoid them if you’re in a hurry. Battles are fought in real-time, and if you have four PS3 controllers, you and your friends can control all four active party members. Otherwise, the computer will control up to 3 people for you, but you can switch between members at will. The AI is able to hold its own in most fights; however, sometimes it will either choose some ineffective attacks or charge blindly and gets itself killed. You can change the AI’s tactics and tell it which skills it can use, but it takes a lot of micromanaging to keep things perfect. There are six different battle difficulties, ranging from easy to chaos. The easy modes are very easy and the enemies will almost just stand there and let you hit them. As difficulty increases, you’ll have to get better at dodging, blocking and choosing the right attacks to break through enemy defenses. Tales of Graces f also uses a system called “chain capacity” to determine how many attacks you can perform in a combo. When you block or walk around during battle, your CC gauge recharges; fortunately, it doesn’t take too long to recharge so battles don’t drag out too long.

Outside of battle, the game also offers a pretty thorough crafting system. When you visit any store, you can synthesize food and items or put shards into your equipment to improve its stats. These items can also be places into your Eleth mixer; for most items, the mixer will simply duplicate the item, but food items put into the mixer will automatically be used in battle. Some foods will heal you when your HP reaches a certain level while others will take away status effects such as slow or paralysis. Most of the items you create are used to fulfill quests you find in each town. Doing these quests are one of the best ways to learn new skills as you can get a ton of SP for the later quests in the game. Skills are learned from the titles you receive throughout the game. Some titles are bestowed upon your characters through the story line but the majority are found by doing things like repeatedly using certain attacks, finding various discovery points or spending money in the shops. Each character has over 100 titles to find; so, if you’re a completionist, there is plenty to keep you going back. 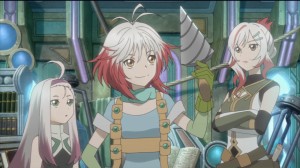 When you look at Tales of Graces f, it’s pretty clear that the game was originally geared towards the Wii. Don’t get me wrong’ the graphics are definitely better than what you see on Wii, but it’s clear that they weren’t the original focus of the game. The re-done shading and modeling are not quite as nice as the cel-shading seen in Tales of Vesperia, but they are certainly still more than adequate. One of the big graphical complaints I have about the game is simply that sometimes the character models have clipping issues. If you add any accessories to the model (e.g., the goggles or inner tubes that you find in the game), the underlying clothing has a very good chance of clipping through. This is of course a minor issue, but indicative of the level of care taken towards the game’s graphics, and graphics purists may be bothered by it far more than I was. The game also mixes in a number of anime-style cutscenes. They have a pretty good quality of animation, and if anything I wish there were a few more times where they used anime instead of in-game models for lengthy scenes.

As with other games in the Tales series, Tales of Graces f does not feature a Japanese audio option. Fortunately, most of the English voice acting is well done; however, there are times where the attempts to synch the voice and animation result in some awkward prosody. The same cannot be said for the background music, though. For the most part it is rather bland and forgettable. Some of the songs are so generic that I’d swear I’ve heard them in other games. The opening song “Mamoritai ~White Wishes~” by BOA is arguably the best song the game has to offer. It’s catchy and right on par with Bonnie Pink’s “Ring a Bell” from Vesperia, if you’re a fan of Japanese pop singers.

All in all, Tales of Graces f is definitely one of the better offerings in the series. While it arguably falls a hair short of Vesperia overall, it continues the trend of above average JRPGs for a series once thought to be buried in mediocrity. A definite buy for JRPG fans.