While working on the story of the first game, Tales director Hideo Baba began to imagine what the world of Xillia would be like after the game  ended. While the immediate threats were resolved in the first game, there was still much left unanswered about the state of the world itself, and so he began to work on it’s sequel, which he hoped would be “an RPG where your choices spin the future.”

Tales of Xillia 2 takes place one year after the end of the first game, and playing the first one will definitely help with the enjoyment of both the characters and the story. With the barrier gone that once divided them, Elympios and Rieze Maxia are still feeling each other out, working on the details that define economic and political cooperation between the two nations. Thanks to the struggles and violence that came with the dispelling of the barrier, there is still a lot of animosity between the two peoples, and groups like Exodus are still hellbent on terrorist tactics in hopes of destroying the peaceful talks between the two nations. But all of that, while prevalent in the ever-present skits and side stories, is merely the backdrop to the central issue of Xillia 2. 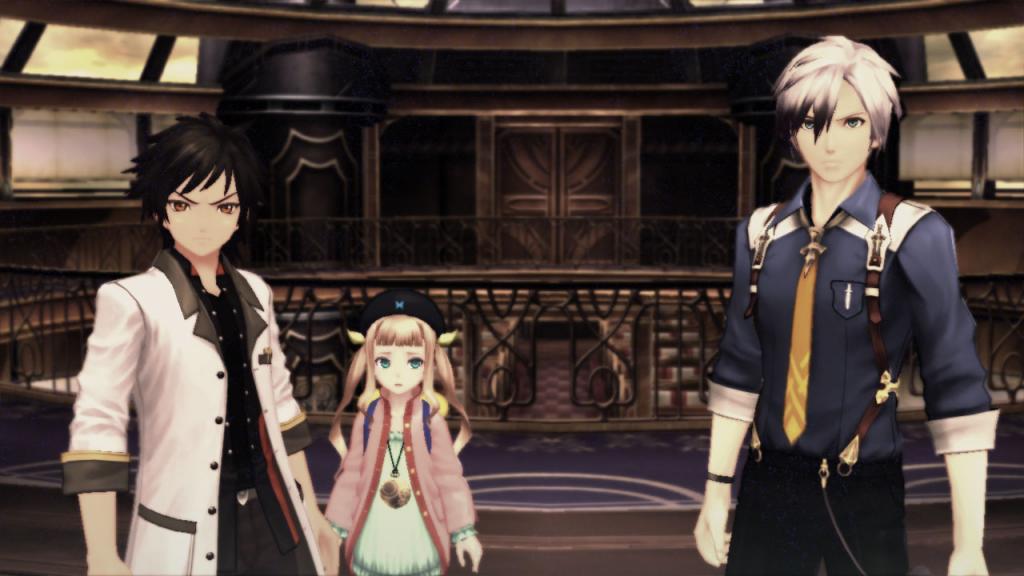 This time, our reluctant hero is Ludger Kresnik, distant relative of the Kresnik mentioned in the first title. Ludger’s heritage makes him a somewhat-less-than-willing target of the Spirius Corporation, where his brother works. After initially failing the test to join Spirius, Ludger arrives for his first day of work at the train station, where he overhears that there is a possible terrorist attack on one of the trains. So, he does what any RPG protagonist would do–he runs onto the train to help save those under duress–but as a result, he ends up severely injured. When he comes to, he finds out that Spirius has covered his medical bills to the tune of 20 million gald. The ensuing conversations and events force Ludger to become an agent of Spirius, otherwise he would never have a at ever paying back his loans.As an agent of Spirius, Ludger is tasked with seeking out and destroying “fractured dimensions”–rifts that open up in the world, leading to pocket dimensions that are slightly different from the ones connected to it. The existence of these dimensions impairs the soul-purification process performed by The Great Spirit Origin. These fractured dimensions cause a deadly miasma to build up in Origin’s realm, and unless they are stopped, it will spill out into the world at-large, making it uninhabitable for humans and spirits alike (of course, there’s always more to the story than meets the eye).

While Ludger is the protagonist, he quickly meets Jude and the rest of the cast from the first Xillia, and he needs all the help he can get to destroy these alternate realities. The game only introduces a handful of new main characters–Ludger’s brother Julius, a young girl named Elle, and various people associated with Spirius–instead relying on the old ones for much of the character and plot development. Each of the main characters has their own side story that can be explored, fleshing them out as the game goes along. As a reward, these sidequests will trigger bonus scenes during the main storyline, depending on the stories explored and the choices made within. And there are a lot of choices to be made. Tens, if not a hundred choices. For the most part, Ludger is a silent protagonist (though you can unlock more speech for him in New Game+), and you are given a binary choice of how to respond in a variety of situations. In casual ones, you have all the time in the world to decide, but when the pressure is high and there are lives on the line, decisions have a timer. And the decisions do have some effect on the ensuing plot and dialogue, as one might expect from “an RPG where your choices spin the future.” If you’re remotely a completionist, hitting all of these side stories and quests, Xillia will run you 50-60 hours or more; unfortunately, being a completionist means disconnecting from the compelling story for swaths of time to perform fetch quests–though you can recruit some help for these–and kill optional bosses. 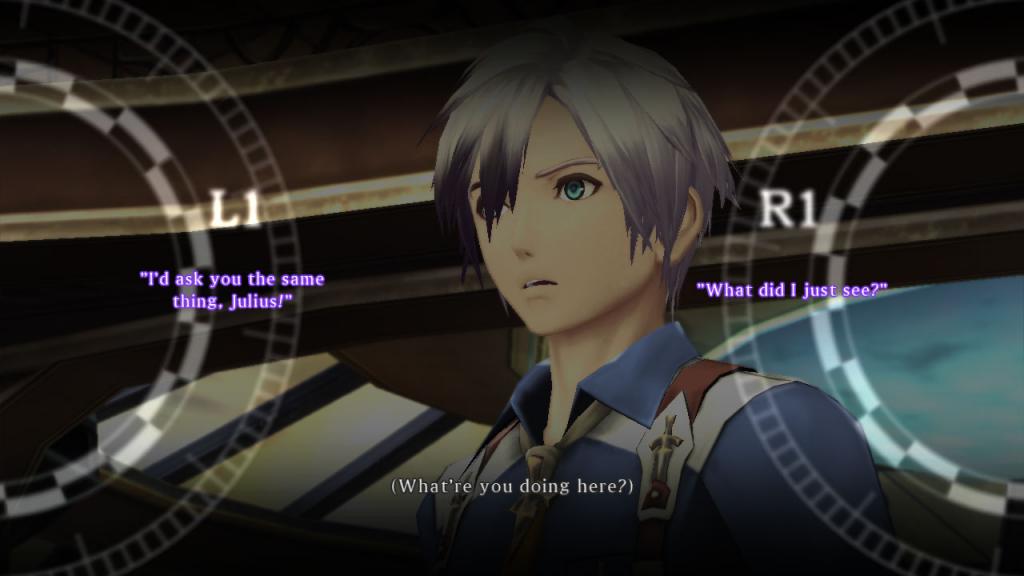 There are a few spots in the story where Hideo Baba and his team really wanted to drive home the frustration and seeming futility of the tasks set before Ludger and company, and they employ a set of story battles to pull it off. JRPGs have long used scripted boss battles where the Big Bad wipes the floor with the characters to demonstrate his superiority, but Tales of Xillia 2 takes a slightly different approach. Without spoiling the battles or their accompanying story, let’s just say that even with a well-equipped party, there are a few fights that will be long, drawn-out slogs. And when you’ve become accustomed to most standard battles taking five seconds or less, or even a minute or two for some bosses, these longer battles really pull you into the struggle the characters are feeling. Certainly, Xillia 2 isn’t the first game to try this, but it definitely uses the technique better than most.

Speaking of battles, Xillia 2 uses a modified version of the previous game’s battle system known as the “Cross Dual Raid Linear Motion Battle System.”Battles take place in real-time with up to four members active in a fight; you control one, and can set parameters for the artificial intelligence that controls the other three. The AI is mostly competent, but occasionally casts spells that the enemy is resistant to or runs headlong into a massive attack. So yes, the issues that have plagued RPG AI for years are still there. The returning characters play similarly to their original versions, and the linked arte system returns, allowing characters to team up and perform stronger attacks together. Ludger offers a nice change of pace from the previous cast with his Chromatus ability, which allows him to transform and use a series of separate attacks and strong abilities. It also removes the other characters from play for the duration of his transformation–turning it into Ludger vs. all the enemies–which means that it can be used defensively if one of your characters is about to be killed.  Overall, the battle system feels like a more refined version of the first Xillia‘s system, a little more responsive, and plenty of fun to play. 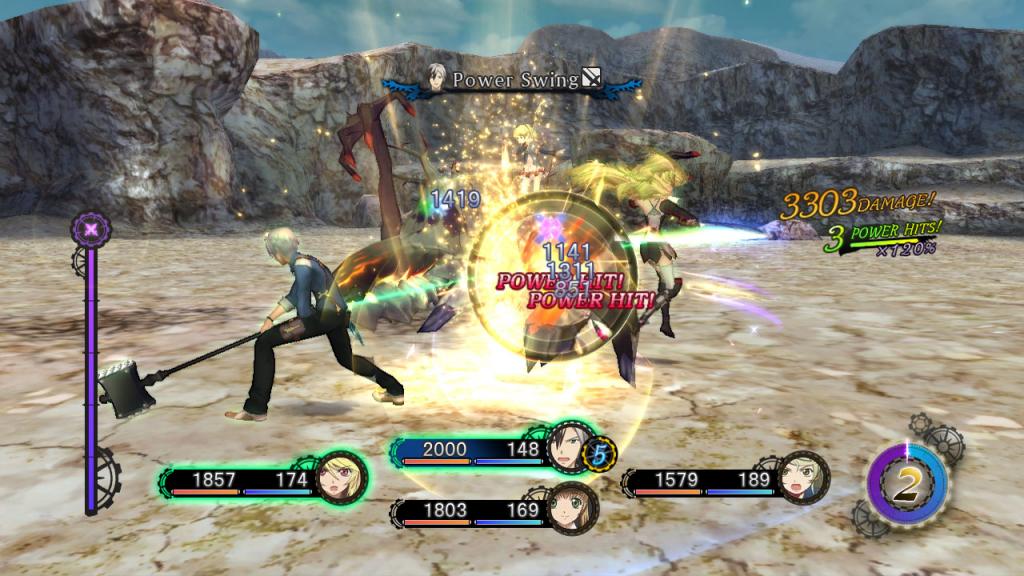 A little less enjoyable is Xillia 2‘s debt system. Ludger must pay back that aforementioned 20 million gald somehow, and the game uses this as a means of pacing out what areas you can go to. Spirius uses the debt to keep a tight leash on Ludger, and as he pays it back, showing his willingness to work with them, they, in turn, let him venture further out into the world. Indentured servitude may have mostly fallen by the wayside in modern society, but in Xillia, it does help reinforce just how stuck Ludger is early on. As the player, it can be frustrating to have these pseudo-invisible walls put up, but it makes for a very effective story device.

Graphically, the game looks a lot like its predecessor, for better and for worse. The animated cutscenes look as great as ever, and I wish there were more of them because the in-engine design still has its flaws. Characters still have hair clip through armor, sometimes models take a long time to load, and there are only a dozen or so enemy designs, each with several pallet swaps. Some of the environments look a little more bland and washed out this time, not as vibrant as they did in the original. Part of that has to do with the aftermath of the first game, but it is unfortunate. Musically, Motoi Sakuraba provides a very similar feel to the first game, using some of the same and/or very similar songs in the sequel’s soundtrack. The opening song is performed by Jpop queen Ayumi Hamasaki and titled “Song 4 U.” If you’re familiar with her work at all, it sounds like her standard fare.

Overall, Tales of Xillia 2 is a well-done sequel. It feels like an expansion at times because the world is still so similar, but that also speaks to the continuity of the design. The gameplay improvements are nice, and make it every bit as fun as the original.