Tales of Xillia is the latest in the series of games from Hideo Baba and friends at Namco Bandai’s Tales studio, and the second PS3 Tales game to come to North America.With a new battle system and the choice of two protagonists to follow, Xillia offers a lot of promises, but can it keep them all?

A first in the Tales series, but similar to games such as Star Ocean: Second Story, Xillia offers the option of following two heroes: Jude Mathis, a young medical student, or Milla Maxwell, a mysterious woman with the power to control elemental spirits. There are minor differences in the plot through the first three-fourths of the game, but the stories diverge greatly towards the conclusion. The story brings both protagonists together very early on, as Milla loses her ability to summon the Four Great Spirits while investigating dangerous technology. Jude gets caught up in her mission and is forced to flee with her. They recruit four others on their journey including Jude’s childhood friend and a mercenary with several skeletons in his closet. You’ll have the full party pretty early in the game, which is nice in some ways, though you’ll find yourself wondering if there could have been one or two more party members added later on. While this dual storyline sometimes results in a confusing plot, as motives are often more obscure than the character’s beliefs, the story does begin tying things up at the end; however, without playing through both storylines, it is hard to get the whole story. Fortunately, with the New Game + option, the second playthrough will go much quicker, letting you flesh out the whole story. 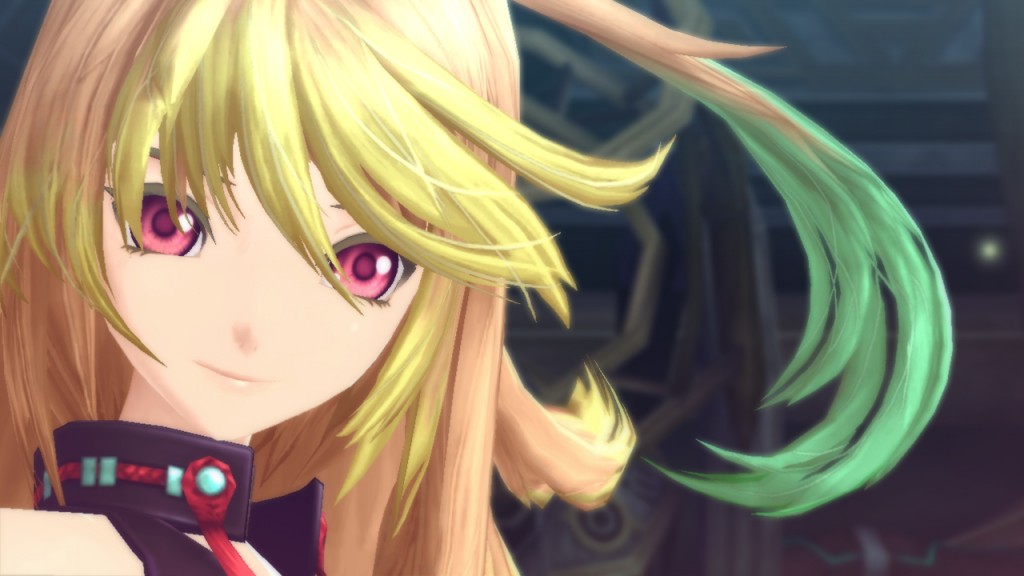 The Japanese title translates to RPG of Unwavering Convictions, and most of the characters embody this throughout the game. The six characters that come to form your team each share this trait, and interestingly, so do several of the opposing forces you encounter. Even with these unwavering convictions, most of the characters do manage to grow and change. A lot of these character insights come in the form of classic Tales series’ skits, short character interactions that provide character depth and a lot of humor. These skits are  also used to signal the opening of subquests, and let the characters have one-on-one and small group discussions about recent plot events. While completely optional, ignoring them will make for a very flat and much more boring experience.

While many of the hallmarks of the Tales series made it into this latest incarnation, it also features a revamped battle system. Xillia still offers a real-time battle system using up to four characters but with the addition of character linking. By linking to another character in battle, the AI will provide offensive and defensive benefits as well as access to shared skills. Jude will restore the HP of knocked-down characters, Milla will bind enemies in place, etc. The characters can also team up to perform special attack and healing skills that are considerably stronger than any individual’s abilities. These skills are vital to beating the game’s optional bosses and offer an extra level of strategy in setting up your team. The access to these “link artes” is determined by which artes your character has equipped, so making sure they are compatible with the linked partner requires a little extra brainpower and management. 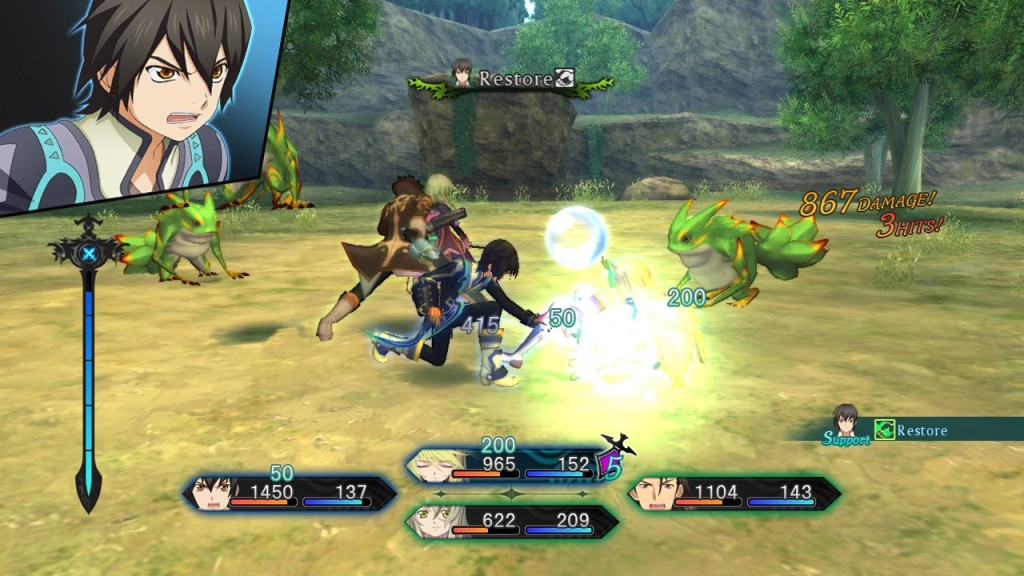 As the characters level up, you are given access to their Lilium Orbs, similar to the Final Fantasy’s Sphere Grid or Crystarium systems, where you determine the character’s path of development. The orb is made of a series of hexagons, and at each vertex (and sometimes between them) are orbs that increase various stats, such as strength, hit points, or vitality. Skills and artes are located in the spaces between the hexagons, and by connecting all of the orbs surrounding the skill/arte, the character will gain access to it. As a result, Xillia offers a modicum of growth customization, though at higher levels, you eventually gain access to all the skills offered.

Along with these new additions, Xillia is also the best-looking game in the series, though it does still have its flaws. Parts of the character models will clip through the environment or even themselves. While not horrible, it is still distracting to watch a cutscene in which Milla’s hair seems to pass through her own arm. Those minor quibbles aside, the game’s characters look quite nice, and many of the environments are gorgeous. Unfortunately, the same cannot be said for the handful of the game’s port areas, all of which look virtually identical. It was an odd choice to save time on that environment when all of the other cities, forests and swamps had their own identities. The animated sequences, while few and far between, were used quite well to depict some of the heavier action scenes in the story. 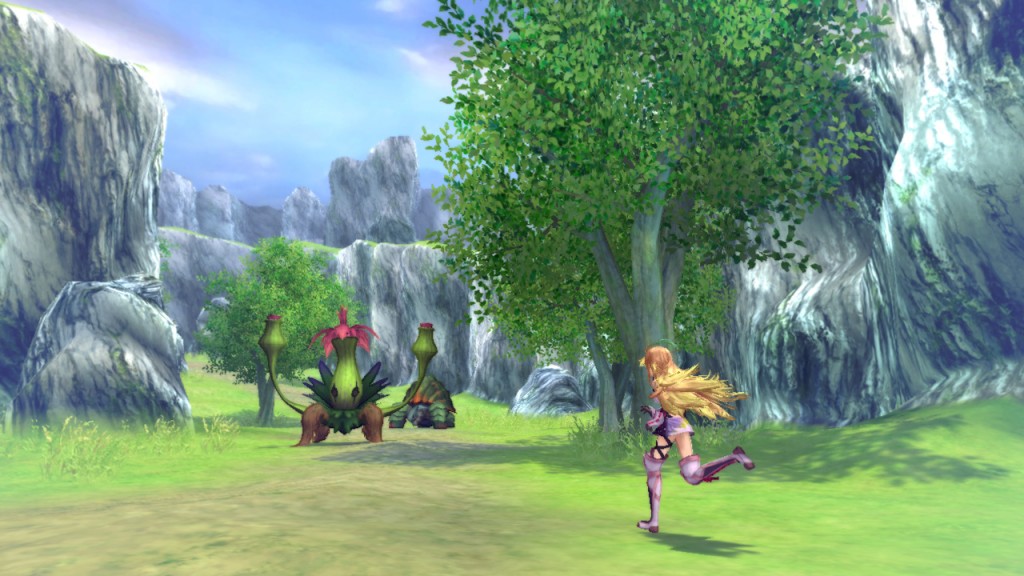 Motoi Sakuraba once again provides the scores for Tales of Xillia and the variety of music keeps the soundtrack fresh. There are several themes that play as you explore the various plains and dungeons, each befitting its environment. The opening theme, “Progress” by Ayumi Hamasaki was not a favorite for me when I first heard it, but the song grew on me each time I heard it. While it’s no “Ring a Bell,” it’s certainly a good song in its own right. The voice cast had some interesting choices, including actress Minae Noji as Milla. Her delivery is very flat and disarming at first, but as her character is fleshed out, it makes more and more sense. The English cast also features voice acting veterans such as Todd Haberkorn and Travis Willingham. The Japanese cast likewise features veterans such as Miyuki Sawashiro and Tomokazu Sugita. Regardless of which language option you choose, the cast does a fine job, though there are few standout performances.

Overall, Tales of Xillia is a very good addition to the PS3’s catalog of JRPGs, but it will definitely appeal more to hardcore RPG enthusiasts. Casual gamers might not want to delve the depths of character management, but if they do, it makes for a fulfilling experience.