The Last Story, Mistwalker’s highly anticipated JRPG for the Wii, finally made it to North America this August. With Final Fantasy greats Hironobu Sakaguchi and Nobuo Uematsu directing the game and composing its soundtrack, respectively, fans have been looking forward to this title for a long time. Now that it has arrived, does it live up to everyone’s expectations? 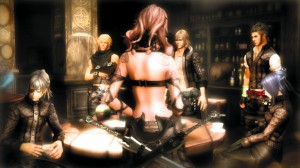 This epic adventure tells the story of Zael, a young mercenary who dreams of becoming a knight. When the game begins, his group of mercenaries is working on a job from Count Arganan of Lazulis Island: they must clean out some of the monsters plaguing the city for a nice reward. However, things get complicated when Zael obtains a strange power from a mysterious being he encounters during the mission. Thanks to this new power, he and his friends become involved in a conflict that traces its origins back to the time when the land started dying.

This overall plot is predictable at times, but for the most part, it stays interesting. That doesn’t really matter much because The Last Story is definitely driven more by its characters’ individual tales than anything else. The lead characters, Zael and Calista, present a believable love story, though it does make for some sappy cutscenes. Unfortunately, both of them are a bit dull until closer to the end; once they realize how to change their lives, they take action and become much more exciting. Thankfully, Zael and Calista aren’t the only characters in the game. There’s Dagran, Zael’s friend and the mercenaries’ resourceful leader; Syrenne, a hilarious, tactless woman who loves her booze; Lowell, a fashionable guy and the resident flirt; Yurick, a young mage who wants to know what happened to his father; and Mirania, a bookish girl seeking the reason for the world’s decay. Each of these brilliantly written characters comes alive on screen, and you won’t be able to stop yourself from caring about them. 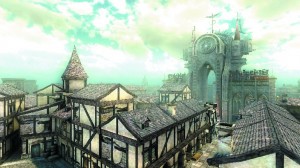 In addition to amazing characters, The Last Story has excellent sidequests when you want to take a break from the main story. Most of the game takes place on Lazulis Island, but there is so much to do there that you’ll never be bored. Actually, the sidequests are often more interesting than story quests: almost all of them develop the characters’ personalities in some way, and they have some of the best boss fights in the game. Plus, the dungeons are replayable, so you can always go back for more experience. When you aren’t raiding dungeons, you can explore the city to find items and earn money. There’s even a merchant in the bazaar who will let you run his shop and sell items to NPCs. If you want to just goof around, you can always throw Prank Bananas at the townsfolk or be clumsy for a while and bump into things. There’s actually a man on Lazulis Island who will give you items based on the number of times you’ve bumped into people or objects.

Of course, there’s plenty of fun to be had from fighting if pranking NPCs isn’t your thing. The Last Story has a great action combat system that you’re sure to fall in love with. You can set things up so your character auto-attacks when you tilt the analog stick toward an enemy, or you can use manual controls. However, you’re rarely alone in a fight, so you’ll have to use your party members’ strengths to your advantage. Once the leader’s skill bar fills up, you can order the other characters to attack, cast magic, retreat, etc. Most magic in The Last Story involves an area of effect. For example, if a mage casts a healing spell, it etches a heal circle on the ground, and when you stand inside, your health regenerates. 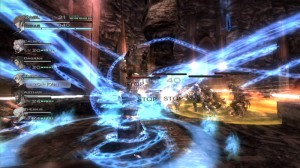 You’ll spend most of the game in control of Zael, so his abilities merit deeper description. One of the first things you learn is how to diffuse magic circles, which will cast different effects on your party or foes. Early on, Zael also gains the ability to use what the game calls gathering, which allows him to aggro enemies on the field as well as revive any fallen party members he touches. He can also use crossbows to take out snipers or seek out other ways to end a battle quickly. For example, if you use seek mode during a fight, you can often direct a mage to knock the floor out from under your enemies’ feet. You’ll also want to take advantage of the game’s cover system. Zael can duck behind rocks or walls while you wait for a good sniping shot, and he also has a particularly strong attack that can only be used on enemies when you’re jumping out from cover.

Though you can’t pick your party leader, the game will sometimes put you in control of a different character. Their abilities don’t change just because they are in charge, so this will definitely force you to mix up your play style, particularly when you are leading with one of the mages.

The battle system is simple and efficient once you get used to it, and frankly, it’s even a bit easy: each party member has five chances to die and revive before becoming knocked out for the rest of the fight, and your leader’s fifth death results in a game over. Plus, before a battle, someone in your party will usually recommend a strategy to use to approach the fight. Still, it’s impossible to dispute the fun of a fast, flashy combat system that isn’t difficult to get your head around. The controls aren’t hard to get used to, either. You can use either the Wiimote and nunchuck or a Classic Controller Pro. I found the second option easier mostly for camera control. If you forget how to do something mid-battle, you can also just open up the main menu to pause the game and review a tutorial.

Sidequests and story battles will probably keep you leveled up enough to progress, but the grinding system is actually one of the most ingenious things about The Last Story. The game actually rewards you for grinding with more than just experience. First off, there’s an arena on Lazulis Island where you can fight monsters and win money. In addition to the arena, every dungeon contains red summon circles that you can use to bring the monsters to you. Fighting battles initiated at a summon circle generally rewards you with lots of experience, plenty of money, and pretty good loot. Plus, you can repeat the battle ad infinitum if you so desire.

It’s a good thing summon circle battles are a quick, easy way to earn money because you’re going to need it. You’ll keep finding better weapons as the game progresses, but you can make those weapons even stronger by purchasing upgrades. Armor can be improved in the same way, which is nice because that means you probably won’t find yourself saddened by equipping an ugly piece of armor just because it has higher stats. 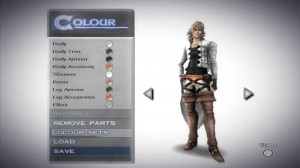 Speaking of attractive armor, the character customization system in The Last Story is pretty darned impressive. Every time you upgrade your equipment, it gains a new layer or accessory. If you don’t like some of the layers, you can hide them without affecting your stats. You also have the option to change the colors of nine different parts of a character’s outfit, and you can do this for all seven characters in your party. If you like a color set you create, you have the option to save it for later so you can continue experimenting. Certain items you collect will allow you to purchase new dye sets in all colors of the rainbow, so you can dress Zael up to look like cotton candy if that’s what you want. There’s even a pair of sidequests that will reward you with “invisible” dyes that make your characters look like they are running around in their undies.

As for audio, this game really does have a superb soundtrack. You can read our detailed thoughts on it here, but suffice it to say, Uematsu is just an incredible composer. Some of the best songs in the soundtrack were boss themes, and the end credits music was absolutely lovely. The voice acting in The Last Story isn’t bad either, but it’s not exactly outstanding. The actors never really got annoying (except for the times when Zael was whining because he couldn’t find Calista), though, so that says something for their skill. In addition to good music, The Last Story has good graphics. It’s one of the prettiest games I’ve seen on the Wii, especially during cutscenes. There was one instance where the environment wouldn’t render properly during a particular sidequest, but that was the only time I saw a glitch.

The Last Story is a short game (I finished in about 33 hours, including extras), but it actually has a lot of replay value. Starting a new game plus lets you keep your items and stats, but bosses become more difficult if you want a challenge. Plus, many weapons that you might have upgraded to their maximum the first time around can be further enhanced on extra playthroughs. The Last Story also has an online multiplayer mode that lets you choose to play co-op or fight in a deathmatch against several other players. I didn’t have a chance to try co-op, but deathmatch was fun. It lets you choose a character to play as and pick a stage, then everyone just runs around trying to kill each other until the timer runs out. 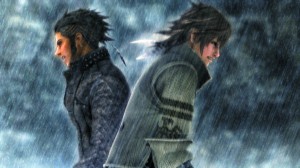 The last thing you’re probably wondering is how much like Final Fantasy this game turned out to be. Well, it definitely has a lot of themes common in the other series: loneliness, finding your own path in life, an emphasis on internal struggles, etc. Overall, The Last Story feels like a kindred spirit to Final Fantasy, though at the same time, it definitely sets itself apart.

Short of a few minor gripes, The Last Story is excellent. North American JRPG fans would have been missing out on an incredible experience if XSEED hadn’t published the game here. It certainly surpassed my expectations, and hopefully it will do the same for you.