When I first saw footage of The Witch and the Hundred Knight, I was excited. Action RPGs have the right amount of pace, for the most part, and the top down camera view has always been visually and aesthetically pleasing. Fast forward through thirty hours of gameplay and unfortunately, The Witch was not what I thought it would be. To be frank, it was a bitter disappointment. With every emphasis on bitter.

The Witch focuses its story on the evil exploits of the Swamp Witch, Metallia. The poor lady has been plagued to live a life of isolation as she is unable to leave the confines of her enormous and noxious swamp. Any activity outside of the swamp leads to Metallia becoming sick, so the swamp is her best friend. And worse, she cannot entertain visitors, as most normal human beings who enter either fall deathly ill from the fumes of the swamp or die. So her swamp makes others sick, and it keeps her healthy. Cue story conflict — Metallia has had enough of living as a hermit and having her immense magical powers stifled. She plans to spread her swamp and rid the world of every witch that has ever caused her pain, effectively taking over the world, which would allow her to move about and cause havoc freely. Classic.

Metallia spreads her swamp through Pillars of Temperance that are conveniently spread out throughout the map. Each Pillar has a huge volume of swamp juice, for lack of a better term, contained inside and when released, the land in which the Pillar resides will turn into swamp. There are other smaller Pillars that act as waypoints, where you may add different bonuses to your attack or defense, as well as refill your GigaCals, which I will get to later. In order to burst the Pillars of Temperance, Metallia must call on the aid of the powerful Hundred Knight because, as mentioned before, homegirl can’t leave. It’s difficult to describe what the Hundred Knight is. It is essentially a demon soldier with the power of one hundred knights. But it’s adorable. And it is the character you control throughout the game.

The story itself is decent and fairly original, and it deserves a moment of recognition. There are tales rooted in ancient past, witches from every realm of the world that are mentioned, leaving a Tolkien-esque feeling, and the overall plot is actually quite good. It’s a shame that the story is often derailed time and time again by the over-the-top obnoxious protagonist. Metallia is as unpleasant as she is murderous, and her tendency to be vile is as blatant as her attempts to cover up that she is suffering from a severe case of teen angst. While it’s interesting and cool that NIS was trying to make a video game based around being the bad guy, this one falls short with Metallia’s awful personality. I get that she’s supposed to be evil in a “so evil you can’t help but love her” way, but that notion is lost within a myriad of terrible deeds and offensive humor.

And Metallia’s humor is a major issue with the game: It is forced and slapstick to the point that it almost feels like a real slap. There is a specific moment that depicts what I am trying to say perfectly. (Don’t worry, it doesn’t give any major plot devices away.) The instance finds Metallia triumphant as she has defeated the Forest Witch and proceeds to turn her into a mouse. “Hey, Ethan, that doesn’t sound so bad.” Patience. Metallia then decides to have male mice sexually assault the now mouse version of the Forest Witch, which is punctuated by Metallia’s raucous laughter. Not only is the scene extremely unfunny, it also makes sexual assault and molestation into a joke, which is a subject matter that should never be written as funny. I lost count of the “whore”‘s, or specifically “vomiting whore”‘s that were uttered from Metallia’s mouth, along with other choice expletives that I have never heard in the combinations she used. I appreciate the effort to be creatively foul mouthed, but it doesn’t work here. Oh, and is Metallia’s sailor tongue kept to at least a dull roar throughout the game? Nope. As you comb your way through bad guys, Metallia interrupts you countless times to let you know that you’re an idiot or provide a parcel of information in a less-than-polite way. (It would get to the point where I would move five feet, get interrupted, move another five feet, get interrupted, and so on.) Moments like these are major detriments and divert attention from what actually works in the game, making it less effective. 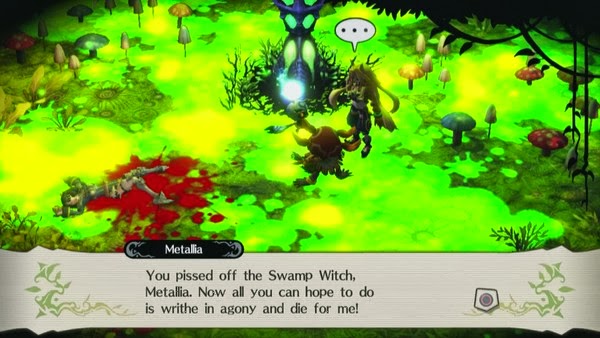 Graphically, The Witch is nothing too impressive, which is ironic considering the game was delayed to focus on the 3D graphics. The graphics are dated and do not appear as though they are a product of more development, so I am wondering what 3D elements the developers decided to tweak. The animations are often clunky, NPCs disappear into their door frames without actually walking into the house, and my personal favorite, the Fog Witch Nezaria’s staff is always poking through her iconic witch hat as if the hat were a hologram. (“Nezaria’s hat, you’re my only hope!”) Though the game falters graphically, those faults are not distracting or annoying.  Fantastic art direction compensates for what is lost in graphics. Each distinct area of the world has its own unique environment and interesting enemies, which makes unlocking new stages exciting. I was never bored when it came to appreciating the vivid art, which is a huge plus.

The gameplay is well-balanced, and the sound effects are… mostly enjoyable.  I hesitate because there are times when the sound really gets in your way–when you’re trying to solve a puzzle, or enjoy the story line–as it can be monotonous and in your face. (I shut it off for a brief moment, if I’m be completely honest.) It also does not help that the voice acting is only solid about sixty percent of the time. Some characters are voiced wonderfully, Metallia’s loyal servant Arlecchino in particular, while others sound as though the casting crew chose from a reality TV show. They’re loud and don’t know how to be real. Most of the time, though, the audio is whimsical and enchanting, coinciding nicely with the fantasy of the realm. Additionally, the Hundred Knight’s weapons plant their hits with some rewarding noises, especially when you’re using a hammer.

The pride and joy, though, is the combat. The Hundred Knight has the ability to wield five weapons — simultaneously.  This enables tremendous damage, chain bonuses, and a literal tornado of punishment. (There were times when my particular Hundred Knight was swirling around so much, it looked like a scene out of Twister.) And the game provides plenty of loot to create an optimal loadout for the cute little Hundred Knight. The learning curve is also fairly simple, so players can become world-class, five-handed knights quickly. There are times when the difficulty jumps dramatically (namely the transition from the first stage to the second stage), but those times aren’t annoying. They just serve as a subtle reminder that this is an RPG, and you need to grind levels. Unfortunately, as fun as the gameplay may be at times, it also includes one of the biggest, most gaping flaws of the game. 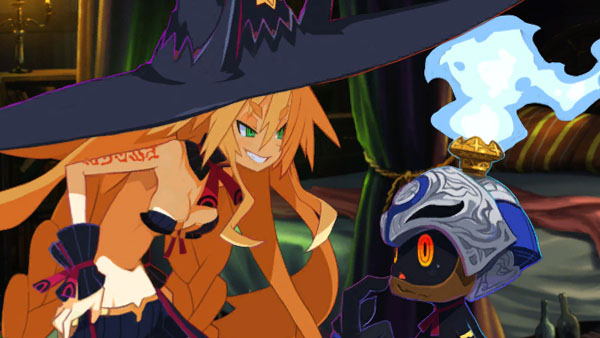 At the beginning of the game, Metallia lights a torch on the top of the Hundred Knight’s head. This, as the game explains, is to propel darkness, and in doing so, it burns up what is known in the game as GigaCals, or GCals. Aside from that copout, the torch is also explained as a tool for Metallia to keep track of the Hundred Knight’s location. These GCals act as a timer throughout the stage, starting at 100, and burn up slowly or quickly depending on where you are in the game. I get the merit of installing a timer, as it provides challenge, but the timer is still out of place in an RPG. Action RPG or not, role playing games are meant for immersing yourself, spending time within the world, getting to know the quirks and the townspeople, and so on. With a glaring timer in your face, those feats are hard to accomplish. Although there are various ways to replenish your GCals–including eating your opponents, spending points at Pillars, or using select items–it’s not enough to let you fully envelop yourself in the world. If you wanted, you could just eat all your foes to keep the timer from running out, but in an RPG, you shouldn’t have to do anything to enjoy the world indefinitely. Even when you’re roaming the towns, the GCals continue to deplete. When a new town was introduced, I would quickly find a shop, purchase what I needed, and leave as fast as I could without exploring properly. The GCal system was the game’s biggest flaw because it prevented me from wanting to be spend time in the world. Instead I made my way through quickly, without fully appreciating everything. It’s like buying a puppy and having to sign a contract that says you can only play with it twice a week. How the hell are you going to let that puppy know how cute it is if you can only see it twice?

I’m going to tell you what I told Dan: playing The Witch was not the most fun I have ever had, but it was not the least, either. When combo chains were flowing and bad guys were getting torn to shreds one after the other, it was hard not putting on a smile. On the other hand, those moments did not happen with enough frequency to distract from the qualities that made me want to turn off the game forever. The issues are far too glaring to notice what is working in the game, which is a bummer. If you’re looking for a fun action RPG, I would recommend looking elsewhere, unless you like your RPGs timed.

Full Disclosure: This game was reviewed using a copy from NIS America.