For Final Fantasy‘s 25th anniversary, Square Enix wanted to do something a little different for the series. In the last quarter-century, Final Fantasy has been made into traditional RPGs, tactical RPGs, MMOs, fighting games, action games, rogue-like dungeon crawlers… the list goes on. At this point, rhythm games were about the only thing Square Enix hadn’t tried, and thus Theatrhythm Final Fantasy was born. The series has long been known for the great musical scores from Nobuo Uematsu, Masashi Hamauzu and others, so there is plenty of material for a music game to draw from. However, given the recent mixed reviews for the main series, how does Square Enix’s adventure into unknown territory fare?

The fact is, it all depends on your mindset. If you pick up Theatrhythm looking for a classic RPG with some musical elements, as the ESRB certificate describes it, you’ll be sorely disappointed. But if you expect a fun rhythm game spanning the musical history of the Final Fantasy series, the game leaves very little to complain about. Being a rhythm game, there isn’t much of a story to talk about. Theatrhythm takes place in a land called Rhythm, which houses a crystal that is powered by music. The crystal has been drained of its power and Chaos is once again threatening the peace. The only way to stop Chaos and save the world is to re-energize the crystal with Rhythmia (rhythmic energy) as you adventure. You’re told this right at the start of the game, and the story doesn’t appear again until you’ve collected enough Rhythmia to re-energize the crystal, and then only long enough to tell you that the world is safe again. Suffice it to say, you shouldn’t be picking this up for deep plot or character development.

Instead, you should be picking this game up for the chance to hear almost all of the best songs in the series all in one place. As with any rhythm game, if you don’t enjoy the music, you’ll probably hate the game, but it’s unlikely that anyone will be picking this game up without hearing at least a few tracks from the series first. When you first pick up the game, you’ll have access to five songs from each main series title:  one each for Field Music Stages (FMS), Battle Music Stages (BMS), and Event Music Stages (EMS), plus each game’s opening and endings, giving you 65 songs right out of the gate. These songs include fan favorites such as “One-Winged Angel,” “Battle at the Big Bridge,” and “The Sunleth Waterscape.” By accumulating Rhythmia, you can eventually unlock other songs as well, though it will take you quite a few points before you get the first one. The game seems to cover almost all of the most popular songs, but for those that are missing (e.g., Final Fantasy IV‘s “The Final Battle”), you will be able to buy quite a few of them as DLC. 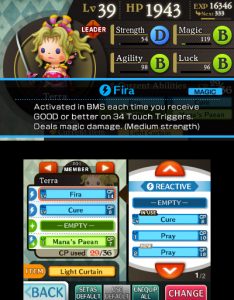 When you first start out, you’ll be asked to select a party of four heroes from a list of 13 Final Fantasy protagonists, one from each main series title. As you play, these characters will learn abilities such as magic spells or stat boosters to help you in the various stages, though their effects are generally limited. Strength and Magic help with attacking during BMS while Agility helps with traveling speed in FMS, and Luck improves your chances of finding items. However, if you were cursed with no sense of rhythm whatsoever, no amount of cure spells or phoenix downs will keep your party alive. Gameplay in Theatrhythm is broken up into three different modes: Series, Challenge and Chaos Shrine. Series Mode lets you pick one game and play the opening, FMS, BMS, EMS, and ending theme for that title all in succession. Challenge Mode lets you select any one song you’ve cleared in Series Mode with the additional option to practice the song without fear of failing and getting a game over. Chaos Shrine lets you play one of ten FMS and BMS songs randomly put together into a “Dark Note.” Dark Notes offer you the chance to obtain crystal shards to unlock other characters for your party and are also a fairly decent source of experience points and items.

Square Enix elected to go with a split screen presentation between symbols and the gameplay area, making it look more like the gameplay of Gabrielle’s Ghostly Groove than Elite Beat Agents, if you’re familiar with those titles. Once you have selected a party and a stage to play, depending on whether it is FMS, BMS or EMS, you’ll see symbols either scroll across or simply appear on the upper screen in time with the music. Each type of symbol has a lower screen action associated with it: either tapping, holding the stylus down or sliding it in the direction indicated by the arrow. Getting the basic motions down is simple enough, but as you increase the song difficulty from “Basic Score” to “Expert Score” or “Ultimate Score,” the speed of tapping increases and the rhythms become more complex, allowing you to tune the difficulty to your skill level. At the end of each stage, you’ll receive a score and a grade rank (from F to SSS), and based on your performance, you’ll also receive experience points and Rhythmia. The experience levels up your characters, improving their stats and giving access to new abilities as mentioned above. The Rhythmia unlocks more songs as well as items for your “Museum” and “ProfiCard.” The gameplay, while very simple to explain, can be incredibly addictive if you love the soundtrack.

Theatrhythm also offers StreetPass functionality and local multiplayer. For StreetPassing, you create a ProfiCard which shows off your name and self-selected title as well as some of your gameplay statistics to other players. In addition, you can also attach a Dark Note to your card to share them with others. The game also features local multiplayer functionality for up to four people, as long as everyone has a copy of the game. Unfortunately, it doesn’t support online multiplayer or 3DS Download Play functions, both of which would be nice options to have. In multiplayer mode, you can play Dark Notes together, but only each person’s leader goes into battle. If there are only two or three players, the game fills in the rest of the team with computer players. The twist of this mode is that all the players share a life bar, so if one of the players is bad enough, it can kill the whole party. Fortunately, in the little bit of time I spent in multiplayer, I didn’t run into this problem. After the Dark Note ends, all the players receive the same item and crystal shard rewards, but each receives their own grades and a new Dark Note. It’s nice to have a chance to experience this game in a group, but it can be tough to play all in one room since there is a very slight lag between the host and other players so tapping isn’t always quite in unison.

The game eschews any attempt at flashy graphics, instead going for a simple but cute design. The characters and monsters have a chibi-like appearance which bridges the gap nicely between the 8-bit designs of the original game and the beautiful graphics of the recent PS3 titles. During the FMS sections, the game has a variety of different backgrounds that scroll along behind the tapping icons and characters, with specific backgrounds associated with specific songs. The background for Final Fantasy‘s “Mt. Gulg” features lots of rock and lava while “Blue Fields” from Final Fantasy VIII shows various structures from the game in the distance, including at least one of the Gardens. The backgrounds during BMS are generally simple and fairly reminiscent of the backgrounds seen during SNES and PS1 era battles, but higher quality. The only real variations in the appearance come during the EMS sequences, as each game’s event video features scenes taken directly from the original Japanese releases, so some of the games inherently look better than others. Because any text that appears is in Japanese, the dialogue won’t spoil things for most people (unless you read Japanese), but some of the video clips may drop story hints for those who haven’t played all the games yet.

The game’s aforementioned museum lets you see event videos and listen to songs as you unlock them. Unfortunately, just beating a song doesn’t put it in your collection; they are given to you at certain levels of Rhythmia points. Once unlocked though, you can favorite certain tracks and build a playlist of your favorite Final Fantasy music to listen to at your leisure, which is a great option to have. The museum also shows off your CollectaCards which are randomly obtained during gameplay. The cards feature various characters, summons and enemies from the series with little bits of flavor text. Once you collect enough of a certain card, you can also see their in-game actions by examining it in the collector’s album.

All in all, the game is exactly what it should be: a fun romp through the history of Final Fantasy music. It’s clearly targeted a certain demographic who will love the game, but it might just win over rhythm game fans who haven’t heard the music before. The gameplay does get a little repetitive if you’re stuck on a certain difficulty, but with the number of songs to play, there’s plenty of chance to change it up. Theatrhythm Final Fantasy is certainly not a bad 25th anniversary gift to long-time fans of the series.