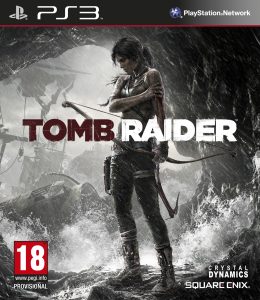 Tomb Raider has had a rather rocky history when it comes to video games. While it enjoys a huge following for rightful reasons, Tomb Raider games have been highly inconsistent, with some titles being exciting and others being just an exercise in futility and repetition. With the last outing being nearly 5 years ago, the downloadable title Guardian of Light notwithstanding, Crystal Dynamics decided to breathe new life into the long running, dormant franchise. But is the decision a sound one?

This reboot of the Tomb Raider franchise, simply titled Tomb Raider, explores the origins of Lara Croft. She starts off as a young, curious little explorer with a knack for adventure and discovering lost artifacts and civilizations. She’s out on an expedition chasing an ancient Japanese myth and looking for the long lost island of Yamatai. Unsurprisingly, things go south as her ship crashes with the other survivors on-board and she’s separated from them. From there on, the tale gradually develops Lara from a reluctant combatant to a hardened killer as she is thrust into one perilous situation after the other. Forced to brave the various threats the mysterious island throws her way, she has to find the other survivors and along the way discovers the many secrets the island holds.

The tale is a simple one, with the regular danger, adventure and betrayal elements thrown in for good measure. There is the damsel-in-distress best friend Lara has to save, an unstable and greedy scientist, a smack-talking skeptic who questions Lara’s every move and an eccentric, crazy villain. The character profiles and the reasons for the expedition are all presented in the form of a back-story that unfolds gradually as Lara watches previously recorded videotapes; it’s nothing groundbreaking though. However, the real star here is Lara Croft herself. Lara has never been this real and this rooted in reality. She’s understandably scared in the beginning, even going as far as crying when she is forced to kill her first assailant. She grunts at each straining physical maneuver, expresses her fear through cries and bursts of breathlessness, and lets out gasps of wonder upon stumbling across the island’s hidden treasures. Camilla Luddington’s credible performance as Lara Croft is commendable, as she delivers each dialogue with conviction and with a near sense of urgency that almost elevates the sense of claustrophobia throughout the game, which is weird considering just how expansive the game’s environments are.

Speaking of which, the island of Yamatai is a beautiful setting for this game. The environmental design is excellent; there are just as many open battlefields riddled with interactive objects as there are tight spaces that hold the numerous treasure-filled wonders. Tomb Raider takes a more open-world approach, which is fitting in the context of this game. The entire island is broken up into numerous Base Camps, and upon visiting one you can save your status, fast travel from one base camp to another and upgrade Lara’s abilities and weapons. As you progress, you gain XP for each and every action and leveling up awards you skill points which let you upgrade Lara’s primary abilities. These abilities are broken into three categories: the Hunter, which consists of the more aggressive techniques such as the ability to carry more ammo, landing steadier and deadlier shots with bow and so on; the Survivor, which enhance your material finding abilities such as locating animals, food crates, highlighting the various collectibles; and then there’s the Brawler, which focuses on the up-close-and-personal combat moves like using dirt to blind the enemies and then taking them out, or using your pick-axe to disable them. These skill trees lend a sense of progression that works really well, more so as it fits in the with the game’s mission to gradually transform Lara into a skilled killer.

One of the major components of the gameplay is the combat which has been given a standard, third-person treatment with a cover system. While she starts out with a bow, Lara eventually finds new and different weapons, from a Pistol, to a Shotgun, an Assault Rifle, and a Sniper Rifle and so on. The basic loadout may seem standard, but it’s the game’s numerous upgrades that keep it fresh and exciting to tinker around with. You see there are a lot of parts lying around, called Salvage, which can be found in specific crates, or on slain enemies. These parts are the game’s currency as they are used to purchase upgrades for your weapons. In addition to that, hunting around can also net your various parts for your weapons, and finding a certain number of them lets you transform your gun from the current state to a more powerful one, with all the purchased upgrades intact. It’s a neat little system, and seeing your double barreled Shotgun get bumped up to an automatic, 12-round killing machine feels really good.

The other big part of the gameplay is occupied by the exploration. There is an almost unending scope for exploration in Yamatai, and there are tons of reasons for you to do so. In addition to the gun parts and salvage mentioned above, there are hundreds of Artifacts that give you a look into the island’s many secrets, Documents that explain the island’s troubled, supernatural history, and various interactive area-specific challenges to complete. One part of the island may task you with lighting a certain number of lamps, another area may have you burn a certain number of propaganda posters and so on. Tomb Raider gives you plenty of reasons to hang around long after you have completed the story, and that adds a lot to the game’s longevity. The most important part however, one without which 50% of the game’s title holds no meaning, are the tombs themselves. There are hidden tombs in every area of the map, and finding some of them can be pretty tricky. But the payoff that accompanies the exploration is massive. These tombs all contain a certain puzzle you have to figure out in order to claim the end rewards which, in addition to a sense of immense of gratification, include massive amounts of XP, Salvage, Skill points and a map that unveils all the Artifacts and Documents in the area.

Last but not the least is the traversal. Traversal is fairly standard as has been done in many third-person action games before, but Tomb Raider has a sense of progression that few can match. You see traversing new areas needs you have to certain specific tools, such as a strong pick-ax that can latch on to ragged surfaces, or a rope arrow that lets you pull down weak doors, or maybe a rope ascender to travel up a rope and also pull down heavy structures. These objects are gained by Lara as she progresses through the campaign, and these make traversal and puzzle-solving extremely fun and challenging. Having such a refined system of progression makes you feel like you need to really ready yourself before tackling the new dangers that lie ahead, and Crystal Dynamics really succeeds in that regard.

The game’s presentation too is rock solid. The game looks beautiful from sun-kissed grasslands to snowy mountains, from crampy tombs to wrecked interiors of sunken ships; every aspect of the environment is gorgeous to look at. It’s a shame that the game doesn’t display this visual fidelity with consistency. The environments can look a tad bit too bland in close quarters, especially when moving through crevices to access tombs. This is not a complaint however, as more often than not the game impresses with its graphics. The character models look good too, with Lara herself looking wonderful. The rest of the cast looks serviceable. The soundtrack is nothing noteworthy, but the voice acting is solidly done. In addition to Camilla’s outstanding performance, the rest of the supporting actors do a really good job of, well, supporting!

The multiplayer is the complete opposite of the game’s consistently enthralling campaign. There is no variety, no different game modes and it ends being just a regular run-of-the-mill multiplayer kill-fest which has been done much better in a lot of other games. The matches even get a little sluggish, and it is really hard to find players sometimes. With all said and done, multiplayer is not the reason you’d want to visit the mesmerizing island of Yamatai. Tomb Raider is a brilliant new take on the legacy of Lara Croft. With exciting new gameplay additions, thrilling exploration, and a spot-on sense of progression, this much more mature campaign rarely takes any missteps unlike the multiplayer portion of the game. If you’re a Lara Croft fan, or even a general lover of action adventure titles, do not miss this one.