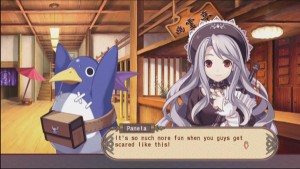 The world of Trinity Universe takes place in Empyria, located in the Netheruniverse, home of the Demon God King. Empyria has mysteriously become surrounded by all sorts of space debris that threatens to crash into the surface, disrupting the lives of the citizens, or worse, destroying the whole area. Kanata’s father was turned into a Demon God Gem in order to help control and repel the objects, and it is Kanata’s duty to follow suit. However, he has no intention of blindly following that tradition; so, the Giga Goddess X has sent the Valkyrie Rizelea to make sure Kanata is turned into the gem. Both protagonists meet up with new party members to help further their goals, including cameos from Etna, Flonne and the Prinnies from Nippon Ichi’s Disgaea series as well as Pamela and Violet from Gust’s Atelier series. Of course there are numerous original characters that make appearances as well such as a “super assassin idol” named Mizuki and a treasure hunter with serious issues about his name.

Trinity Universe gives you the option of playing both main characters’ storylines, with a “true ending” unlocked after completion of both. You can also carry over items and money from one story to the other via a new game plus option. Both main characters have the goal of stopping the drifting objects from heading for Empyria, but they have very different means. Kanata wants to explore the objects so he can find and destroy their gravity cores, sending the objects spiraling back out of orbit. But Rizelea wants to follow protocol, turn Kanata into the Demon God Gem and use its power to protect the Netheruniverse, and she’s willing to use as much force as necessary. Regardless of which path you choose to follow, your party will explore various dungeons, collecting items and fighting battles against random monsters during the quest to save Empyria. These dungeons encompass the majority of your play time as the party explores school buildings, pirate ships, libraries and all sorts of other dungeons that happen to float into orbit. Many of the objects offer multiple levels that give different enemies and items depending on the time of day they are explored. Other than bosses and event battles, all other encounters are random battles, which happen a little more frequently than necessary, but they can be stopped for a while by destroying a specific area in the dungeon. 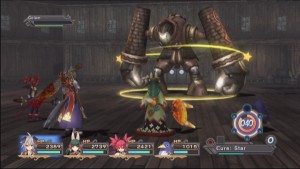 The battle system in Trinity Universe is somewhere between the traditional turn-based systems of many JRPGs crossed with the battle system found in Cross Edge with a few new tweaks thrown in. As a result, trying to keep an eye on every little detail simultaneously can take some acclimation time for those who normally only play traditional turn-based RPGs. Battles are divided into a player turn and an enemy turn which alternate back and forth. The square, x and triangle buttons each have a type of attack assigned to them, and each takes a certain amount of action points to use. The circle button perform abilities that are equipped on your character such as healing, escaping from battle or boosting your team’s attack. Once you begin attacking with a character, their action points begin to count down, and when their AP reaches zero, the next player in line will begin their attack. Rather than using all of your AP, you can end a character’s turn early to save AP and create combinations between characters for extra damage and stat bonuses. Keeping your combinations going between characters becomes very important against higher level monsters in order to maximize damage without causing them to “Soulbreak.” Some monsters have a second meter called a Soul Barrier that decreases when they are hit, and when it reaches zero, the aforementioned Soulbreak occurs. Many times, this results in the enemy’s defense dropping drastically, but it will also replenish their HP back to full. Other times, they may actually becomes stronger or change their weakness as a result. For expediency, the best course of action is just to try to kill them without Soulbreaking, but you may get rarer items by defeating soulbroken enemies. As you chain attacks together, you also fill your Fury Gauge which can be unleashed upon the enemy for a character-specific ultimate attack, perform a massive healing technique or create a shield to lower damage taken. The battle system definitely offers plenty of options for how to face off against the enemy, and many people will find that certain combinations will work best for their style of play.

As a reward for all of your battling and dungeon exploring, you’ll accumulate a vast array of items, souls and mana that can be used in synthesis. As with most games that involve Nippon Ichi and Gust, there are a wide variety of equipment and items that can be synthesized with your loot, but this game offers more than most. Using souls that you accumulate, you can create monsters to fight in the monster arena that reward you with items that boost your characters stats. The mana you collect can be turned into Managraphics and Meteorites. Managraphics are designs that are painted onto your weapons, and they generate different types of mana from battling. Meteorites are equipped by your characters to boost their stats and rewards from battle. And the various alchemic ingredients are used to create weapons and armor. With so many things to synthesize, completionists will have to spend well over 100 hours, if not 200 hours, just trying to collect everything. 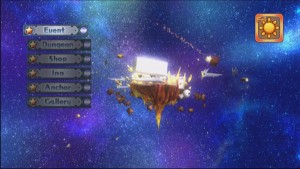 Outside of the dungeons, you’ll spend your time on a navigation menu overlaying a view of Empyria with all the objects floating around it. Some of the objects are rather innocuous and silly like donuts or rabbit slippers, some allow events to occur such as a television set or a bowl of tangerines, and others grant you access to different shops or dungeons. You can leave the menu to look at all of the items in orbit one by one, or you can use the menu to specifically look at all available events, dungeons and shops. You gain access to some of the shops when they float into orbit, and others are run by party members; so, you may not have access to all shops at once. For example, Miyu runs the Managraphics shop, and you can only have access to the shop if you have recruited her. By the end of the game, you should have access to most of the important shops, but early on certain options are only open with Kanata and others with Rizelea.

The translation staff at NIS America clearly had fun localizing Trinity Universe, breaking the fourth wall multiple times and making references to other games and anime series. The humorous dialog keeps the game from getting completely bogged down in the intermittent dungeon grinds. The game is littered with commentary like “I doubt those even exist, dood. Making epic bosses would definitely exceed NISA’s budget, dood,” spoken by a Prinny during a discussion about giant enemy bosses. Some of the enemy games have some humor to them as well, such as the electric mouse-like monster named a “Peek-at-you.” If joke references about anime and gaming are your cup of tea, you’ll definitely get a kick out of the effort NIS America has put into this localization. The only complaint I have about the dialog is that the game is not fully voice-acted. Most of the scenes do have voice acting, but there are quite a few that are text-only.

Trinity Universe marks the first release that features 3D models of characters from Disgaea or the Atelier series. The dungeon exploration and battle screens all occur in 3D, and the models and environments look nice. However, I just wish there were more variety in the dungeon designs. After many rounds of exploration, you’ll find yourself getting very used to some of the environments. The game also feature more dynamic character art during conversations. Rather than static images, the anime-style character art actually features moving mouths and eyes and even look as though they are breathing. Admittedly, at first it seemed a little creepy; however, it’s actually a very neat effect and a nice addition to the game experience. The game has a cute opening song that plays alongside an anime-esque opening video, but the song also plays during the menu screen and it may start to grate on some people if they don’t like the style. Most of the music is very upbeat and good for keeping you going through the dungeons, but there are some times it could stand to sound a little more sinister.

All in all, Trinity Universe is a fun game that was clearly made for the enjoyment of fans of Nippon Ichi and Gust’s other games. Its lighthearted storytelling and dungeon crawling are good enough for someone looking for a single playthrough, and the synthesis and collecting aspects are good for those who want replayability.