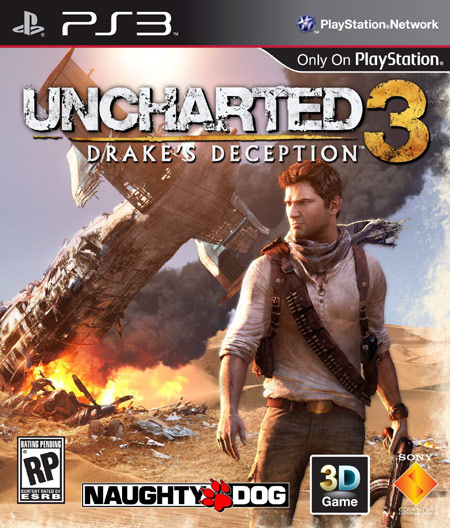 Naughty Dog had a really tough task ahead of it. After playing through two spellbinding games that delivered several thrills a minute, gamers the world over were anxiously waiting for the famed treasure hunter to make a return to their consoles, ready to be swept away on yet another globe-trotting adventure. Expectations were understandably high. So, did Naughty Dog deliver what the players were hoping for? Well, for one, it would be a huge understatement to say that Uncharted 3: Drake’s Deception is good. Uncharted 3 is an exquisitely crafted title that you just wouldn’t want to miss.

Fortune hunter Nathan Drake is back and better than ever. Accompanying him are his best buddy and mentor Victor ‘Sully’ Sullivan, reporter and ex-wife Elena Fisher, and the beautiful and reckless Chloe Frazer. Without wasting any time whatsoever, the game gets you right into the middle of the plot, kicking things off with a quick introduction to the game’s improved combat system and a glimpse at the crafty antagonist Katherine Marlowe. Using Sir Francis Drake’s ring and a decoding device, Drake sets out to discover the ‘Atlantis of The Sands’, the lost city of Ubar, and unfold a 400-year old mystery. Thus begins the grand adventure as players are taken from the dark and seedy streets of London, to an abandoned chateau in France, to Syria’s dilapidated Citadels, and finally to the lost city of Ubar. Each location acts as host to a series of explosive and memorable action set pieces. Without giving anything away, let me just say that the story is very good, and really fits in with pattern the previous games have followed. Discovery, deception, danger, it has it all. Even moreso than the great story itself, it’s the fully fleshed out characters (save for Marlowe), and their delicately handled and satisfyingly developed relationships which truly win you over. Sully and Drake’s relationship is really endearing. Drake’s character is just as well laid out as his past is explored, giving us an insight into the renowned treasure hunter’s life and his identity. The script does an excellent job of letting you empathize with the entire cast and it pulls you into the events that transpire. Anyone setting out on an adventure with Drake for the first time in Uncharted 3 need no prior knowledge to be blown away by the magnetic story or the characters. Save for Drake and Elena’s constant bickering and a few subtle references thrown around, Uncharted 3 doesn’t rely much on the previous games’ events, although a prior acquaintance with the characters would certainly help you connect better.

Whenever a picture of Uncharted 3 pops up in my head, a lot of glorious adjectives accompany its beautifully rendered, picture perfect visuals. But these words merely drop a hint as to how good it actually looks in motion. Painstaking attention to detail, superior textures, life-like character models, varied and beautiful environments that just take your breath away. Every little puff of dust, sun filtering in through the broken roof, the sand clinging to Drake’s hair, everything in the world of Uncharted 3 looks stunning. When you first lay your eyes upon the lost city, it will leave you mesmerized. This brilliance is not just limited to the environments; the characters look equally amazing. Nate and all the other characters are brilliantly animated. The motion capture technology has been fully harnessed to deliver beautiful facial animations. I noticed a few blurry textures on buildings occasionally (once or maybe twice), but other than that, the graphics are flawless.

Even though it’s hard to pinpoint any major changes in terms of Uncharted 3’s gameplay from the previous outings, it’s definitely not a bad thing. Those who have played the previous two games, or any shooter for that matter, will feel immediately at home. Taking cover, rolling, aiming down the sights, everything has been assigned the same button as before. Shooting is easy, smooth and feels just as responsive as it should. The enemy AI is really impressive and forces you to strategise rather than sticking to a run and gun approach. Enemies will constantly try to flank you or flush you out of cover by throwing grenades, while themselves taking cover and popping out to shoot. Platforming sections are as good as ever. Jumping and grabbing ledges is easy and you will never have to die and stare at a colour-devoid screen just because you failed to grab a ledge. The scripted moments that take place during the platforming sections are thrilling and tense.

Melee combat was somewhat of a complaint for me in the previous two games since the primary focus was on gunplay. But that has been fixed and sorted out this time, as it is much more refined and feels like an important part of the combat. It also plays a huge part in the overall gameplay.  It allows you to hit an enemy even while grabbed. Countering is easy and smooth, there are a ton of animations for combat this time, and overall it feels super smooth and silky. You can even take down multiple opponents with ease. Nate’s trusty diary is back, allowing you to solve numerous puzzles spread throughout the game’s 22 chapters. The puzzles this time are really clever and require you to shake the dust off of your gray matter as mere trial and error doesn’t work. This makes solving them so much more gratifying. Also making a return are the collectible treasures, 100 of them scattered all over the various levels. 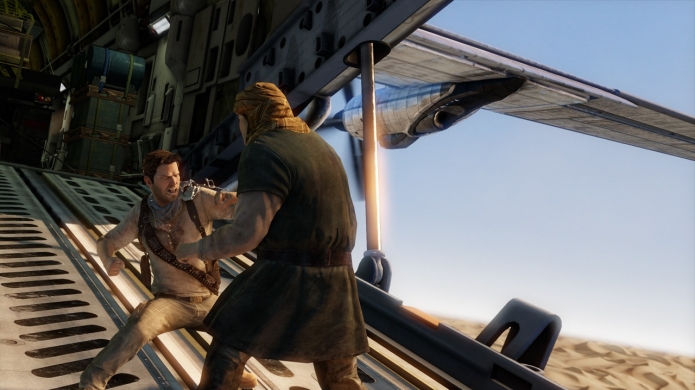 The camera is perfect this time around, and even better than both of the games before. At pre-defined moments, the camera zooms out to let you marvel at the wonderful sights in front of you and as you squeeze your way through narrow gaps, the camera zooms in to convey the tension and claustrophobia of it all. At certain instances, it also provides an exciting display of the events happening in the background as you complete your actions. Cinematic is the perfect word to describe the camera angles.

The well written story is backed up by brilliant voice acting that lends the characters depth, credibility and enhances the experience greatly.  The witty and humorous dialogues are superbly penned. Nolan North, Richard McGonagle, Claudia Black and Emily Rose once again reprise their roles as Drake, Sully, Chloe and Elena respectively. North once again stands out, delivering Nathan’s tension, fear, excitement, delusion, anger and every other emotion in a pitch perfect way. It’s the “above-the-rest” voice acting that makes players connect with the characters. Uncharted 3 is just one of those games that lets the players feel the rush and live the adventure rather than just telling them to press X and go from point A and point B. As with the voice acting, Uncharted 3’s surreal soundtrack really uplifts the entire experience. In addition, the game’s sound design, from the way the guns sound, to the way grenades go off, is top-notch.

I managed to finish the exhilarating campaign in just under 8 hours on normal mode, but that is without finding all of the treasures. But if you go around collecting all of them, you can add at least another hour or so to it, given that finding the treasures simply makes you feel as a badass explorer and serve no additional purpose. But despite the campaign’s fairly linear nature, the beautiful visuals and action set pieces, the amazing story and the sheer number of ways you can kill an enemy (pointing to the superb gameplay) will definitely compel you to play it more than once.

The multiplayer that propelled Uncharted 2 to greatness makes a return, and it’s backed by a robust suite of both cooperative and competitive modes. The competitive modes include your standard fare of deathmatch and team objective variants, while the co-op features wave based battles and objective game types. Regardless of what match type you choose to play, a friend can sign into his or her own PSN ID and rank up alongside of you, this time also in split screen. As you grind for XP, you’ll earn cash wich can be used to unlock new characters and clothing, allowing you to play as either a villain or a hero. You can also purchase new weapons and weapon mods, and tune your custom classes to your liking. Boosters make a return from Uncharted 2. These permanent abilities boost your character should you choose to equip them, but this time around they can be leveled up by using them more often. The newest addition to the multiplayer comes in the form of medal kickbacks. As you get kills and earn medals, you can cash in these medals for a temporary enhancement. These range from obtaining an RPG, to transforming into a deadly swarm of spiders. While the multiplayer isn’t revolutionary by any means, the brilliant level design and ability to acrobatically maneuver around each map make it wholly unique. The sense of movement and verticality is something that isn’t seen in any other multiplayer, and it is essential in setting Uncharted 3 apart from its competitors.

So, summarizing this rather lengthy review, Uncharted 3 can’t possibly be passed up.It succeeds in every aspect; providing a gripping single player campaign, blockbuster action sequences, jaw-dropping graphics, stellar voice acting, and a robust multiplayer outing. It may falter here and there, but  it gets so many things right that any flaw can be easily overlooked. If there is a game good enough to warrant the purchase of PS3, this has to be it. Do yourself a favour and play this game!