Z.H.P.: Unlosing Ranger VS Darkdeath Evilman is Nippon Ichi’s first foray into the world of roguelike dungeon crawlers. The game was made by the same team that has created Nippon Ichi’s famous Disgaea series, and it makes for an fun and interesting mixing of worlds.

The story of Z.H.P. shares many of the humorous, lighthearted aspects of Nippon Ichi’s other games. Super Baby, the future hero of the Earth has been born, but, still being an infant, is in no position for the world to depend on her. Seeing a chance to take over the world before Super Baby can stop him, the villainous Darkdeath Evilman sets out to kidnap Super Baby. Enter the Unlosing Ranger, who must save Super Baby and the world. Unfortunately, the hapless Unlosing Ranger gets hit by a car and killed right in the opening scene of the game. That’s where the protagonist comes in. You play some poor guy who happens to be standing by the mangled body of the Unlosing Ranger, and he gives you his utility belt and dubs you the next Unlosing Ranger. You, a scrawny, introverted teenager must now face off against Earth’s mightiest enemy in your first ever fight, and as expected you get walloped. Just before you die however, you are transported to Bizarro Earth, home of the secret World Hero Society.

Upon arriving at Bizarro Earth, you meet up with Pirohiko Ichimonji, the ghost of the previous Unlosing Ranger, and the young Etranger who will serve as your trainer to help you survive and eventually defeat Darkdeath Evilman. By completing each step of your training, which includes helping the Bizarro versions of characters you see on Earth, you will grow physically stronger from leveling and finding equipment but you will also learn a skill that can be used in the battle against Darkdeath Evilman. After each dungeon, you are returned to Earth (sometimes more painfully than others) to try your newfound powers against Darkdeath…with predictable results.

While your hero is a virtually silent protagonist (save a few emoticons and symbols sprouting above his head), Pirohiko, Etranger and the supporting cast have enough personality to fill in the dead space. The dialogue has a lot of the same feel as the Disgaea series, and is filled with humor and memes. Pirohiko and Etranger’s true character really shines at the end of each chapter during the “Way of the Hero” segment that Pirohiko hosts. His attempts to instill confidence and knowledge about heroism into the main character usually go awry and instead give glimpses into Pirohiko’s own depressing psyche. As an added bonus, there are a wide variety of cameo characters that you can meet as well. By collecting Dengeki cards, you can unlock optional dungeons that are named after manga series published by Dengeki. At the end of the dungeons, you face off against major characters from those series, and they are far more challenging than the main dungeons. The first time I made it to the end of the Kino’s Journey dungeon, I was very happy to see Kino for a few turns…and then I was dead. Other notable titles that have characters make an appearance include Spice and Wolf and Toradora!. 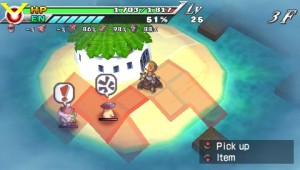 While training in the dungeons, you are completely on your own. You guide your hero and only your hero down into the depths of each dungeon, killing off monsters and collecting the various treasures that you find laying about. Your movement throughout Z.H.P.’s dungeons is very reminiscent of how roguelikes such as NetHack work. Every time you take a step or take an action, the enemies can also move, attack or charge up a spell or skill. Along with your health meter, you’ll also have to keep an eye on your energy meter. Energy is used up by casting spells and skills or just by walking around in the dungeon. If your energy reaches zero, you will begin to lose health, but you can regain energy by eating the meat that you find in the dungeon. The enemies you encounter have zones where they can detect you even if you’re not next to them, but if you are careful, you can sneak by enemies you don’t want to fight or sneak up on others to get an advantage. Occasionally, there are some fairly sizable difficulty jumps from dungeon to dungeon; so, if you’re not prepared you could end up walking in and getting slaughtered, especially in some of the optional dungeons. The enemies you fight aren’t the only hazard you’ll face, the dungeons are also laced with a variety of traps that are hidden from view unless you have certain equipment on.

When you enter the dungeon, you start out at level one, and gain levels as you progress and kill enemies. Once you die (and you will die quite a few times), leave or complete the dungeon, your current level resets to one again, but your total level will increase, and you keep some of the stat improvements. It’s an interesting idea, but it will surely be a little disconcerting to RPG fans who love to power level and see yourself walking around at level 9999 way too early in the game. If you complete the dungeon or leave under your own power, you bring back whatever equipment you have on and everything you are currently carrying. The only real penalty for dying is that almost everything you have with you gets left in the dungeon and is gone forever. There are certain body modifications that you can add to keep things with you if you die, but early on, you’ll have to survive for a while to be able to buy them. While dying in any game can be frustrating, the fact that you can still get something out of it makes it less of a hassle in Z.H.P.

After each round of dungeon-crawling, the Unlosing Ranger returns to his home base on Bizarro Earth. Along with the basic stores that you have at the start of the game, you can also customize parts of the base by choosing what facilities you want to see there. You start the game with a home there, and as an added bonus, it comes with a Prinny pretending to be your wife as well as a daughter. As you progress in the game, you can unlock a blacksmith, an insurance company and a body modification doctor. Yes, a body modification doctor, perhaps the most important area in the game. In order to speed up your growth as a hero, you will be spending a lot of time at the doctor, inserting chips and modifications in your body that increase your abilities (e.g., speed, attack, defense), change the bonuses you get from equipment and more. 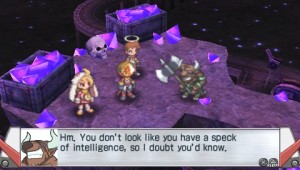 Graphically, Nippon Ichi stuck with their classic sprite style, but they look to be higher quality than those featured in their Disgaea PSP ports. In the dungeon, your character sprite will change his appearance depending on what equipment he dons, which can result in some humorous-looking, but very powerful combinations (just think combos like tank treads for legs, a big dwarven beard, a lance and a gun for an arm). There are a few different environments for the dungeons that you fight in, but eventually you’ll see most of the backgrounds and textures quite a few times before the end of the game.  There is some variance in the graphic quality while fighting Darkdeath Evilman, but the game itself makes fun of that. At first, the boss battle screen looks like an original NES era Dragon Warrior title, and Pirohiko explains that “The reason that the battle screen looks like manufactured ass is because the main character sucks! That’s why!” Which is quickly followed by  “Can’t we just sell it by saying ‘We’re going for a retro look’ or something?” which may or may not be referring to their own recent retro title Cladun. As your hero strengthens and earns some respect from the people of Earth, the graphical quality of the battle against Darkdeath Evilman improves, as well. The only graphical complaint about Z.H.P. is that sometimes the screen gets a little cluttered in the dungeons. When you pick up items or an enemy sees you, a dialogue box and picture of Pirohiko or Etranger will pop up and cover about one-third of the screen, which can throw you off if you’re in the middle of moving around. However, it will disappear after a few moments and you’ll get the chance to see the whole area around you again.

Z.H.P. doesn’t feature full voice acting, instead opting to give voice to the story scenes and occasional sound bites in the dungeon. While the story scenes are solidly done, you might get tired of hearing Pirohiko and Etranger saying “Watch out!” again for the 100th time when an enemy sees you. The music selection is also quite good, especially the training dungeon music that sounds like it was ripped straight from a Japanese superhero show.

All in all, if you have played and enjoyed roguelikes before, Z.H.P. offers a fun twist on the classic system. If you’ve never played a roguelike before, the game can be a little rough at times, but the penalties for dying aren’t world-ending, and it offers enough lighthearted fun that the frustration won’t necessarily ruin the game. I would consider the game a solid buy for anyone who enjoys roguelikes and the Disgaea series when it comes out on October 26th.

Full Disclosure: This review was written based on an advance copy of Z.H.P. that was given to us by NIS America.