Zero Escape: Virtue’s Last Reward forces you to decide who you can trust and who you are willing to betray in order to save your own life. The game opens with the phrase “Why do people betray each other? If you can’t trust anyone, then everyone should DIE“, which pretty much sets the tone for your interactions with the others in this Nonary Game.

That’s right, the Nonary Game is back. Virtue’s Last Reward is the sequel to 2010’s Nine Hours, Nine Persons, Nine Doors, and while you can pick this game up and enjoy a fantastic title, if you really want to enjoy the story behind the game, it’s best if you play 999 first as there are references and cameos that really help tie the story together. This game takes place one year after the last Nonary Game and follows Sigma, a young man abducted on Christmas eve. He awakens in a locked room with a young woman, and the two of them must find a way to escape. Once out of the room, the two find they aren’t alone; they are just two out of nine people brought together to play another round of the Nonary Game. They are greeted by a computer-generated projection of a crazy, creepy talking rabbit who calls itself Zero III. The characters must work in teams of three to solve puzzles in the hope of completing the game and earning their freedom.

As the game progresses, you find yourself experiencing similar, yet quite different, situations over and over again. That’s because Sigma can jump between parallel timelines where he can make different decisions each time. Fortunately for the player, this takes the form of an easy-to-follow flowchart so you can select the exact scene where you want to try a different option. It’s a very helpful addition as you’ll have to explore every major decision in order to get to the end of the game. As you go through the game, you’ll learn about each of the character’s backgrounds to varying degrees, and some of the information you learn in one reality becomes vital to progress in another timeline. It’s a very interesting and well-executed system that keeps you thinking about what is really happening in the game. 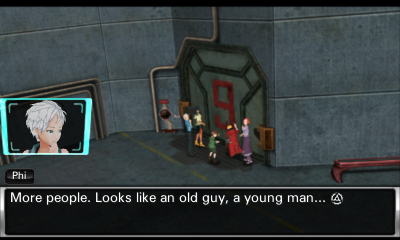 Like 999, Virtue’s Last Reward combines the storytelling aspects of a visual novel with an “escape the room” puzzle system. Once you enter a room, you must search around to find and manipulate items with the goal of getting a password for the safe. Every room has a safe which holds the key to unlock the escape door. The entire game takes place through the eyes of Sigma, and you use swiping motions to move around the room and tapping to pick up and manipulate items. It’s a relatively intuitive system that takes very little time to get used to. Once you pick items up, they appear in your inventory where they can be viewed from any angle, examined and combined with other items. Once you use an item in a puzzle or escape a room, your inventory empties; so, you won’t end up with a cluttered mess to search through by the end of the game. Most of the puzzles are relatively straightforward if you’re a seasoned veteran of puzzle games, but there are a couple with a nice twist.

Each puzzle also has an alternate solution which gives you a second password. This second password will give you access to a file with additional story information. Depending on whether you beat each puzzle in hard mode (independently) or easy mode (with help from your teammates), you’ll get either a gold file or silver file respectively. Gold files reward you with more information than silver files, and collecting all of the gold files is required to see the game’s true ending. However, because of Sigma’s preternatural memory and ability to jump between events, once you earn a password once, if you ever return to the same room, you can just enter the password to bypass performing the puzzles again. The information in the gold files vary between tidbits about items you find during the game to background information on people or events to jokes that are both funny and a little weird. 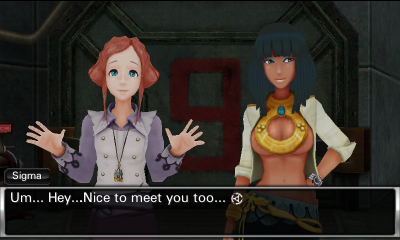 Outside of the puzzle rooms, you’ll see a lot of story advancement as all the characters come back together in order to vote in the “AB game.” Between each room, each team must take part in a game based on the prisoner’s dilemma. During the game, each team of three is split up 2 versus 1 and must vote whether to ally or betray each other. This determines how many bracelet points a person receives during each AB game round: if everyone allies, everyone gets 2 points; if one betrays the other, the betrayer gets 3 while the ally loses 2; and if everyone votes betray, no one gets anything. The ultimate goal of this Nonary Game is to reach 9 bracelet points, open the Number 9 door and escape. Before and after each vote occurs, there will be some conversations between characters as they share information about themselves, what they found in their rooms and plans for how to escape from the game.

Of course, escape is only the goal on the surface. Virtue’s Last Reward wouldn’t be a sequel to 999 if there weren’t other stories going on in the background. The game does an excellent job of tying many of the characters’ threads together by the end, and the few things left unanswered are set up perfectly to lead into a third game in the Zero Escape series. Kotaro Uchikoshi has really honed his craft well, and you can see some influences from his work prior to Zero Escape (e.g., Ever 17) in the story here.

While there have been some graphical improvements over its predecessor, Virtue’s Last Reward did not really take advantage of the 3D capabilities available on the system. Likely, this is because they wanted parallel releases with the Vita, but this would have been a fantastic opportunity for some 3-dimensional puzzles. The game mixes some CG with anime style character graphics with aplomb, and outside of the lack of 3D, there really aren’t any complaints to be had. 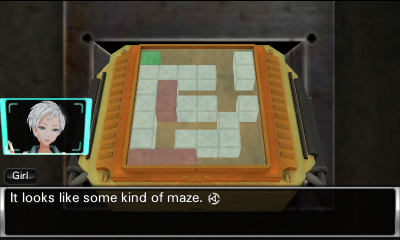 What really helps sell the story in this game is the voice acting. All the usual suspects from recent JRPGs and the world of anime come together in some of the best voice acting you’ll hear in a game this year. Every character delivers a fantastic performance, though that means Quark’s voice actor does a great job of annoying the crap out of you by the end of the game. The game’s music also does a fantastic job of setting the mood in a game where tensions are running high and you’re never quite sure who will turn their back on whom.

Unfortunately, with all the the things that go right in this game, Virtue’s Last Reward does still have a few glitches. While I didn’t run into the worst glitch of them all (one that corrupts your game files if you save in certain rooms), I did have the game freeze up the touch screen in two different rooms, forcing me to reset. These glitches were also in the Japanese release, and it’s unfortunate that they weren’t addressed before the game was released in other markets.

The flaws are minor; Virtue’s Last Reward is still a fantastic game, and perhaps worthy of a 10/10 if it weren’t for the glitches. Overall, the game took me around 30 hours to achieve 100% completion, but it may run you longer if you get stuck on any of the puzzles. For fans of puzzle games and visual novels, this one is hard to beat, and I know I won’t be the only one counting the days until the third game in the series finally comes out.