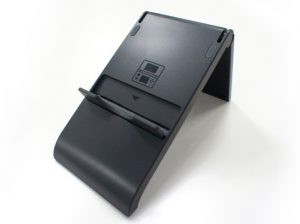 Nintendo has announced that Kid Icarus: Uprising will take advantage of the new slide pad and (in Japan at least) it will come with stand.

The slide pad will enable left handed players to control Pit’s movements with the right thumb stick while using the stylist in their left hand. I’m sure the left handed community is excited about this.  Being able to change control schemes is never a big priority for most game developers.

Many game testers complained of hand aches due to how the controls are set up for the game. You will only be using one hand to hold the system, since the game has heavy use of the stylist, and that hand will also have to control your movements. Nintendo has listened to those complaints and has decided to include a stand with the Japanese release of the game. The hope is that this will alleviate the stress on your controlling hand.

Honestly I see myself using the stand more for watching Netflix and Nintendo Video than playing games.

What are your thoughts?  Sound off in the comments.