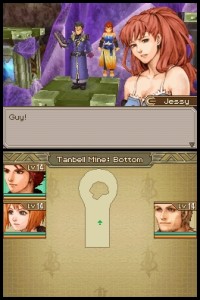 If you’re a Lufia fan, you haven’t had much to look at since The Ruins of Lore on the Game Boy Advance in 2003, but you’re in luck. Natsume, best known nowadays for publishing the Harvest Moon series in North America, has announced they will be going back in time a Lufia title at E3.

The “new” game, which is a remake of Lufia II and designed for the DS, is called Lufia: Curse of the Sinistrals, and features six playable characters. While the original, also published by Natsume, was a turn-based RPG, Curse of the Sinistrals reimagines the title with real-time battling. As you explore the world in this action RPG, expect plenty of enemies plus the hallmark of the Lufia series, plenty of puzzles to solve. Natsume will be showing off the game live at E3, but we have some screenshots and artwork available now. No official release date has been set yet, but Natsume hopes to release the game this fall for $29.99.