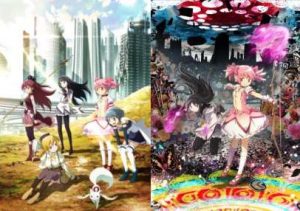 Madoka fans can rejoice as Aniplex will be bringing the first two movies to North America and beyond on July 30th. The two films retell the story first shown during the critically-acclaimed television series produced by Shaft. Aniplex released the TV series in three parts from February through June 2012. Puella Magi Madoka Magica follows Madoka Kaname, who agrees to become a magical girl in order to have her wish granted. Madoka soon comes to realize that being a magical girl is not as glamorous as she would have believed as she learns about the dark side of fighting against witches.

Packaged together, part 1, Beginnings, and part 2, Eternal, will both be available on Blu-ray in collector’s and standard editions. Both editions will contain textless opening and ending themes as well as the theatrical trailer. In addition, the limited edition will also have different cover art, a deluxe booklet with notes and art sketches, as well as a soundtrack CD. Also, while supplies last, Aniplex will be including a special postcard for Madoka fans. The imported discs will offer 6 language options for subtitles, and they will hit store shelves with an MSRP of $89.99 for the standard edition and $104.99 for the limited edition.