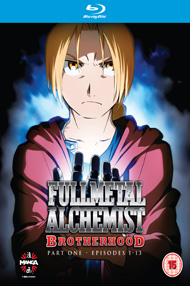 Manga UK has announced that they will not be finishing the Fullmetal Alchemist: Brotherhood series on Blu-Ray.

Manga UK released the first two Blu-Ray volumes as well as a DVD version, but due to unexpectedly low sales (around 750 copies of volume one), they have decided not to finish the series on Blu-Ray. The series will still be available on regular DVD in the UK.

FUNimation holds the licenses in North America, and has not announced any issues with Blu-Ray sales here. The third volume is due out on Blu-Ray on December 28th.