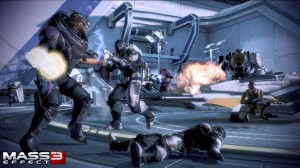 Upset that you won’t be able to download the Mass Effect 3 demo when it launches February 14 because of your refusal to pay for an Xbox Live Gold membership? Worry no longer, because Microsoft has decided to do you a solid.

This post on BioWare’s forums passes on the good news to fans:

“In celebration of ME3, Xbox is pleased to provide fans access to ME3 demo multiplayer for the time leading to launch. Xbox LIVE Gold gives you exclusive benefits including multiplayer gaming, member-only deals & previews, and access to entertainment with Netflix, ESPN, Hulu Plus and more.”

Basically, any Silver member will be upgraded temporarily to a Gold membership should they choose to download the Mass Effect 3 demo.

While this will have no effect on players who already have a Gold membership, it will allow players without one to instantly download and participate in the demo on launch day, instead of waiting a week. Not every Gold feature will be unlocked with this trial (Netflix, Hulu Plus, and ESPN, for example, are still restricted), but this will allow current Silver members to play the Mass Effect 3 demo, plus multiplayer in other titles through the length of the trial. Check out this FAQ by BioWare for more info.

The Mass Effect 3 demo hits Xbox 360, PS3, and PC on February 14 and features two single player sections and the new co-op multiplayer mode. If you’re still somehow on the fence about Shepard’s final battle with the Reapers, this meaty demo should help you decide whether or not to pick up Mass Effect 3 when the full game arrives March 6.