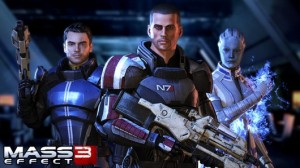 I’m barely 20 hours deep into Mass Effect 3, and so far it’s turning out to be every bit the astounding game I was anticipating. But it has not been met without controversy; the barely week-old game has caught serious flak for what many fans are considering a letdown of an ending. Some fans have even gone so far as to create an online petition begging EA and BioWare to amend the ending via DLC.

Executive producer Casey Hudson had this to say in an interview with Digital Trends: “I didn’t want the game to be forgettable, and even right down to the sort of polarizing reaction that the ends have had with people–debating what the endings mean and what’s going to happen next, and what situation are the characters left in. That to me is part of what’s exciting about this story. There has always been a little bit of mystery there and a little bit of interpretation, and it’s a story that people can talk about after the fact.”

I’m nowhere near Mass Effect 3’s end, so I’m not letting myself be shaken by the negative criticism. That being said, while I respect Hudson’s response to the troubling responses, I can’t really judge it completely having not seen the game’s climax. Regardless, I’ll be pushing my way through to the final battle with the Reapers so I can see what all the fuss is about.

What about you guys and gals? Are you loving Mass Effect 3? Hating it? Still don’t know what the hell a Mass Effect is? Has the ending turned you to a hateful shell of a human? Let us know in the comments below! Also, expect our review to go live in the coming weeks!