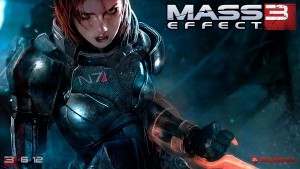 Have you all heard? Mass Effect 3, the final game in this really sweet space opera trilogy, is coming out in roughly one week, and apparently a lot of people are really excited about it.

In all seriousness, Mass Effect 3 is looking like it’s going to be huge at the marketplace. According to MCV (via GameInformer), Mass Effect 3’s pre-order numbers have already surpassed those of its predecessor.

Will Graham, product manager at EA, had this to say about Mass Effect 3’s massive pre-order numbers: “Currently our pre-orders have broken the targets set, we are well ahead of where we were at the same point with Mass Effect 2 and we have all of the platforms aligned for launch, which is a first for the Mass Effect franchise.”

My slobbering anticipation for Mass Effect 3 is well-documented on this site, so it shouldn’t surprise anyone that my pre-order is among that undisclosed tally. Gamers everywhere can cash in on their preorders on March 6 when Mass Effect 3 goes live.