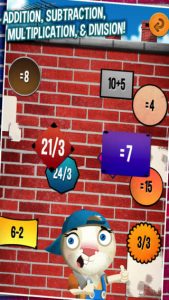 Okay, everyone who hates math, raise your hand. It drives everyone insane, from learning to count all the way to evaluating quadratic formulas and parts beyond, if you’re a math geek. Wombi, a Swedish company who creates educational apps, wishes to make math fun and easy to learn with Wombi Math.

The game allows anyone to not only learn math but also refine their existing arithmetic skills. It teaches the four basic mathematical operations of addition, subtraction, multiplication, and division. It also allows you to customize your learning method and the numbers you would like to practice with. The game play seems to be fairly simple.  Using a brick wall as a backdrop, math equations and answers fill the screen, and it is your job to match up the correct answers with it’s respective equation. Each correct match up removes the problem from the screen making it easier to see the other equations.  A little character in the corner will react by making different faces depending on what answers you give to each equation.

Using a colorful and animated interface, Wombi is hoping that their new app will help young students not only learn math but enjoy learning it as well. Wombi also provides other apps for learning, such as The Letter Monster, which has the player choosing the right letter to feed to a hungry (but friendly) Kraken-like monster. The studio has also made games that have you building your own helicopters or airplanes to save people or just go around flying.

Wombi Math is available on the Apple Store and Google Play Store for $1.99 and can be played on any iPad, iPhone or Android smart phone or tablet device. To see Wombi’s full line of apps, check out their website here.