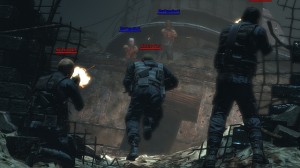 One of the best things about the increasing ubiquity of multiplayer in modern games is the developers who seek to add more interesting layers to online combat. With Max Payne 3, Rockstar is looking to do just that by adding their own unique spin on the common practice of online clans.

As Rockstar co-founder and Max Payne 3 co-writer Dan Houser told IGN yesterday, Max Payne 3 will give players the ability to join public crews that contain thousands of members, or exclusive private crews that consist only of those who are granted entrance. And of course, you can’t be in a crew without garnering feuds and vendettas against rival crews.

A vendetta occurs when you’re killed twice by another player in a match. You’re given the option to open a vendetta against them, which marks them with an X on the map. Kill them and reap extra XP; be killed by them and they take the XP.

Feuds are basically like vendettas, only they involve the entire crew. Spot two or more members of any crew you’re feuding with and there’s a chance for a sudden 10-kill battle to spring up, with the first crew reaching 10 crowned the winners.

Vendettas and feuds are designed to be organic occurrences that Rockstar is hoping will add narrative impact to multiplayer. Using Rockstar’s Social Club system, stats for every crew and their respective vendettas and feuds will be tracked (including individual player stats and feuds) and will carry over into future Rockstar titles, most notably Grand Theft Auto V.

You and your friends can finally create that dance—er, gangster crew you’ve always talked about when Max Payne 3 launches on May 15 in the US and May 18 everywhere else.