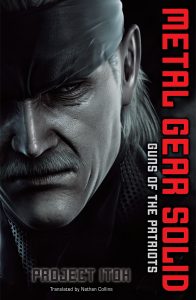 Of course, the novel follows Solid Snake, a soldier who is a member of a nanotech network called the Sons of the Patriots. Snake is close to succumbing to the FOXDIE virus, which has turned him into a “walking biological weapon.” When Snake goes to the Sons of the Patriots for help, he learns that his enemy, Liquid Ocelot, has hacked the system. If the person controlling SOP controls the world, then it’s up to Snake to stop Liquid’s scheme.

You’ll be able to pick this up on June 19th for $15.99 U.S. / $18.99 CAN. If you prefer eBooks, there will be a digital version available for the Kindle, Nook, Sony Reader, and Apple’s iBook Store. You can go to the official website for the book here to learn more about the story and the author. They even have an excerpt from the novel available for you to read.

Are you a fan of the Metal Gear Solid series? Let us know if you’re planning to pick up this book!