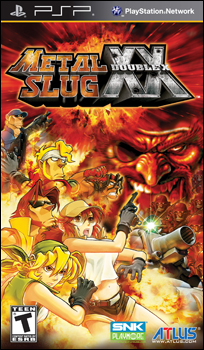 Do You miss old school side scrolling shooters? Have you ever wanted a game that was one X away from ESRB trouble. Well Atlus has you covered. For release on February 23, 2010 the latest in the Metal Slug series is coming to your PSP.

And with an MSRP of $19.99. Nice. We need more developers to give us reasonably priced games.

METAL SLUG XX for PSP system is the new addition to the famed METAL SLUG series that captures all the glory of the arcade experience and more. After General Morden is defeated and captured, a mysterious army arrives from the future to save him. They reveal themselves to be the Mars People and their goal is to provide their future leader with special advanced weaponry to take on his enemies in the present. Classic METAL SLUG characters Marco, Tarma, Fio, Eri, Ralf, and Clark return once again to take on General Morden and his new and improved Rebel Army.

* Arcade fun made portable — The full glory of the METAL SLUG arcade experience has been perfectly captured on the PlayStation Portable with signature off-the-wall military “run and gun” gameplay, colorful, cartoony humor and the opportunity to play together with a friend.

* Multiplayer METAL SLUG — Get the full METAL SLUG experience that recalls the good old days of gaming with your friends when you join up over local wireless to take on missions in 2-player co-op ad hoc mode.