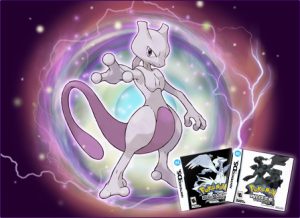 Pokémon Black Version and White Version players in America will be able to add Mewtwo to their Pokédexes via a WiFi event that starts February 12th.

This is exciting news for Pokémon fans because, according to Serebii.net, this is the first time Mewtwo has been released as an event Pokémon. In contrast, their records show that the rare Mew has been available via events in America three times: in 2006, 2008, and 2010.

Based on data for the Japanese event (also from Serebii.net), the downloaded Mewtwo will likely arrive at an impressive level 70, and it may even bring along a King’s Rock, which can be used to evolve Poliwhirl into Politoed and Slowpoke into Slowking. In Pokémon Black Version and White Version, this item is hard to find, with only a 5% chance of being found with a caught Pokémon.

There is no end date for the opportunity to download Mewtwo yet, but don’t forget to take advantage of the event quickly when it opens.