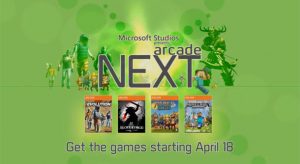 Microsoft has proven with “Summer of Arcade” and “House Party” that they’re no stranger to using contrived events to generate attention for new XBLA games. Continuing in that tradition, Microsoft announced today their next big event: Arcade NEXT.

As a more or less official way of celebrating XBLA’s new Achievement and Gamerscore caps, Arcade NEXT begins on April 18 with the release of Trials Evolution and continues with a new game every Wednesday until May 9’s much-anticipated release of Minecraft: Xbox 360 Edition.

Each of the four games to be released during Arcade NEXT and every new XBLA game released after this period will sport up to 400 Gamerscore and up to 30 Achievements.

Here is the full list of games releasing during Arcade NEXT: