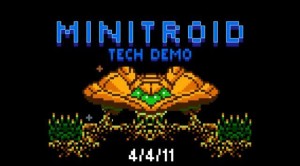 Shinesparkers has come across a nice looking fan made game for the Metroid universe. Minitroid is, like the name suggests, a tribute to Metroid where all the sprites are mini. The creator, Tokinsom, has a tech demo being released later today. The games graphics and game play return you to the original Metroid experience. Shinesparkers report that the demo will take you around 30-45 minutes to complete.

Because this fan game is for a series that is still being produced I have to give the standard warning I always do to the creators.

Why did you not learn from Chrono Resurrection, or Crono Trigger : Crimson Echoes (technically this one finally made it on the web after a Release Candidate was found and posted to reddit by someone not part of the original team.). They advertised that they were making the game and got shut down by the IP lawyers. Keep your work a secret until it is completed then post to all the file sharing sites you can find. This is going to be the only way that fan made games are going to be able to exist. Why put years into making a game if you get to show nothing for it in the end.

Tonkinsom, you have more of a leg to stand on then other creators as you are not reusing Nintendo property by using all of your own sprites and music but don’t expect the lawyers to care.

. Get the tech demo here.