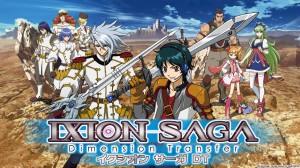 It’s the season for new simulcasts, and Crunchyroll has already announced a few, but we have three more titles to add to the list. Magi, Ixion Saga DT, and BTOOM! will all be rolling out on Crunchyroll in the coming weeks.

BTOOM! has also been picked up by The Anime Network, so you have plenty of chances to watch the show. You can read a show synopsis at the above link. The show is now available on Crunchyroll and will update on Thursdays.  The show can be seen by fans in the United States, Canada, United Kingdom, Ireland, Australia, New Zealand, the Netherlands, Scandinavia, and South Africa.

Magi is, unsurprisingly, set in a world magic. It follows Aladdin, a young boy who travels in search of a treasure found in the mysterious ruins known as “Dungeon.” While searching for the treasure, Aladdin meets Alibaba, and together they will found out what their real destiny is. The simulcasts will arrive weekly on Wednesdays starting October 10th at 10 a.m. Pacific Standard Time. Licensed by Aniplex of America, Magi will be available in the U.S., Canada and South Africa. The show can also be watched on Hulu.

Hokaze Kon is sent to Mira, a world embroiled in the midst of war. He shows up just as a princess is being attacked and manages to save her. Now he must escort her to the capital city so she can marry in hopes of finally stopping the war once and for all. Will they make it, and even if they do, will Kon find his way back home? Ixion Saga DT will show on Sundays at 10 a.m. starting October 7th. The show will be available for viewing in the U.S., Canada, U.K., Ireland, Australia, New Zealand, South Africa, Denmark, Finland, Netherlands, Norway, and Sweden.