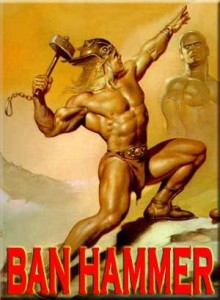 Not surprising but sad nonetheless. The latest installment of the Mortal Kombat series was given the “Refused Classification” rating by Australia. The reason would be obvious to anyone who has played a Mortal Kombat game.

The game includes over 60 fatalities (some of which are noted above) which contain explicit depictions of dismemberment, decapitation, disembowelment and other brutal forms of slaughter. Despite the exaggerated conceptual nature of the fatalities and their context within a fighting
game set in a fantasy realm, impact is heightened by the use of graphics which are realistically rendered and very detailed. In the opinion of the Board, the game contains violence that exceeds strong in impact and is unsuitable for a minor to see or play. The game should therefore be Refused Classification pursuant to item 1(d) of the computer games table of the National Classification Code.

This is why Australia needs the R18+ classification for Video Games. If they had this in place the game would be legal for sale for adults to purchase. As it stands now if it’s not suitable for kids then no one can play it. So game makers are forced to censor/dumb down the action and dialogue or must forgo release to the Australian market.

The decision to add such a rating is dependent on a unanimous vote by the Attorneys General’s. All have said they would support such a measure, and even the general public has made their voice clear that they support it. The decision keeps getting delayed though. Just this week it was announced that the vote was pushed back again. The March meeting will be missing New South Wales representative John Hatzistergos. The committee hopes that a vote can be done at their next meeting in June.

You can read the full decision here. You can also read up on our previous coverage of the R18 debate here.