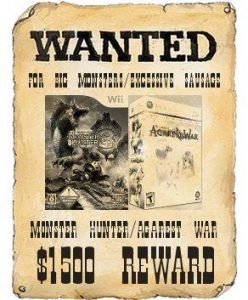 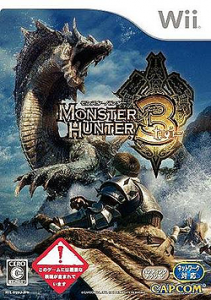 Monster Hunter Tri is the third installment in the Monster Hunter series and is the direct sequel to Monster Hunter 2. It was first announced for the Playstation 3, but was canceled. Monster Hunter games have never been very big on storyline. They’re essentially just big safari outings with mercenaries. Town A has a monster near by, go kill it. Hey you don’t need an Oscar winning script to have a fun game. The big draw for most people is the co-op play. Up to four adventurers can go hunting together. The game will be free to play over the internet for US and EU purchasers (Japan has to pay). The game will support Wii Speak for those co-op outings as well. Thank God! That was one of the worst things about the Phantasy Star Online series. No chat support and a clunky virtual keyboard.

The latest game comes with an Improved AI, more weapons, armor and monsters. And Hey, sometimes mindless violence is what a person needs to unwind. 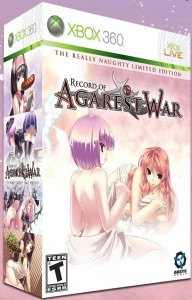 Ok, I give in. Aksys’ marketing campaign has gotten to me and I really do want to see if Record of Agarest War is as over the top as the trailers and “Naughty Edition” make it seem. I’m always up for a good tactical RPG; so, I’m hoping this one will fit the bill. The fact that the game progresses between multiple generations of people, and their skills are determined by who they end up marrying is always a neat addition that adds replay value.

Of course, it isn’t a completely new system; something similar has been used in Fire Emblem and Phantasy Star before. But something tells me that the conversations and situations that go on in Agarest War are going to be a little different. If you’re man enough to try it, Record of Agarest War is set for a PlayStation Network and XBox360 release on April 27th.