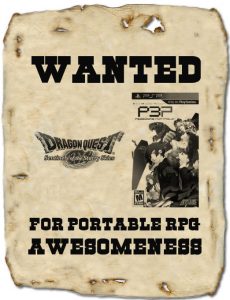 Greg’s Pick: Dragon Quest IX (DS)
I’ve been a fan of Dragon Quest since I played the first Dragon Warrior (US Release Name) on the NES. Personally I like this series way better than Final Fantasy. You will never find a character like Vaan in Dragon Quest game.

In Dragon Quest IX: Sentinels of the Starry Sky, Square Enix has made a huge push for customization options. You’ll be able to customize your hero’s look and eventually create custom party members as well. You’ll even be able to customize your jobs to some extent. Players will also be able to take advantage of a multiplayer mode where up to four adventurers can team up and explore dungeons together.

The game also offers a “Tag Mode” setting where, even when you’re not playing, you can set it up to download treasure maps and characters from other players in the area. Via Nintendo’s Wi-Fi system, you’ll also be able to download new items and quests. 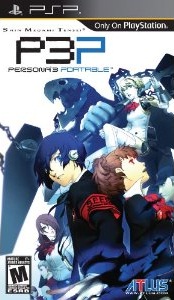 This month, Atlus brings back what was arguably the best game in the Persona series. This time, not only can you take it with you, you can also choose a male or female protagonist and your social links will change accordingly. The game also fixes what was one of the biggest flaws, namely the sub-par battle AI, by allowing you to control all the characters during battle. Personally, I didn’t have nearly as many issues with poor AI when I played the original as many others claim, but the chance to fully control the party is a definite plus.

A few things were downsized in order to make the game PSP friendly – some of the animated cutscenes were shortened or removed and strolling around the school and other locations has been reduced to a selectable list. However, these small removals certainly don’t ruin the game. The chance to play a new protagonist and enjoy the game on the go makes this an easy pick-up. Plus, if you pre-ordered, you got a sweet hat, just like Junpei’s.