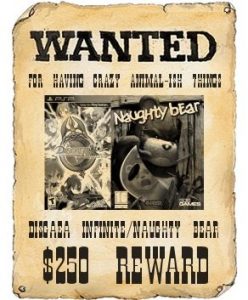 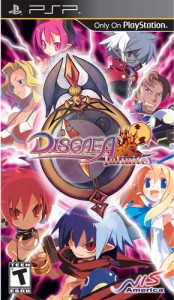 This month, I thought I’d go for something simple and fun. If you’re a big fan of the visual novel genre, you know that there are a ton of Japanese ones that we never see available for purchase elsewhere. So, the chance to play one on the go and have it feature NIS America’s mascot character, the lovable Prinny, is too hard to pass up. It also has the benefit of being a budget title with a pre-order price of only $19.99.

In Disgaea Inifinite,  you take the role of a Prinny who has been accused in the attempted assassination of Laharl, the Overlord of the Netherworld. In order to clear yourself of the charges, you must do whatever it takes to get to the bottom of the mystery including possessing other characters or trying to read their minds. At $20, don’t expect to get 40 hours out of the game, but it’s a nice change of pace from the usual gaming fare.

Once upon a time…………………….
Naughty Bear is the only bear on the island that was not invited to a certain birthday party because of the fact that he is too naughty. While he crafted a gift for the occasion, he was laughed at by the other bears and sulked back to his house. Naughty Bear decides to take his revenge against all the other bears on the island.

The game is a sandbox-styled world where players take control of Naughty Bear, using stealth and tricks to lure the inhabitants into situations where they can be executed. It features a system that rewards the player for creative acts of violence and debauchery against the inhabitants of the island. The game also has multiplayer options with games such as Capture the Flag, King of the Hill, and Search and Destroy.

Pre-ordering the game from GameStop will let you dress up Naughty Bear as Jason Voorhees. What could be better?