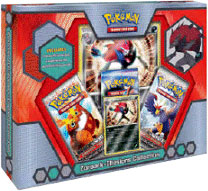 Although the tins were announced earlier, their exact contents were finally revealed. The tins will be released on November 2 and will feature a promo card, a figure of each of the starters’ final evolutions, 5 booster packs (unknown at this moment if they are going to Emerging Powers, Black And White or a mix of both series) and an online code card for the Online TCG.