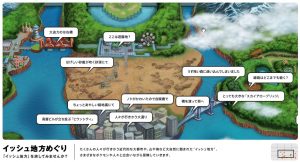 On the official Japanese website for Pokémon Black and White, they have now added a map of the Isshu region complete with screenshots from various areas. The site (all in Japanese) requires some minor navigation to get to the map. For those who can’t read Japanese, after you click on the link, there is a short flash intro, then under the picture of the new legendaries, there is a bar.

The screenshots show some big improvements graphically for the series, and the 3D environments will definitely add a new feel to the games. Pokémon Black and White are due out in Japan on September 18th, and in North America and Europe sometime during the first half of 2011, and as reported previously, will feature all new pokémon until you beat the main quest. Of course once that’s done, you can start transferring over your old collection…six at a time. If there’s something that still needs updating about the game, its the transfer system between your own games because it takes forever.