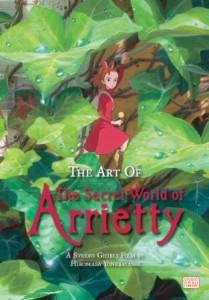 New clips have surfaced for Studio Ghibli’s latest animated film, The Secret World of Arrietty, which hits theaters February 17th. The feature film is based on a novel called The Borrowers, written by Mary Norton.

In the film, fourteen-year-old Arrietty and her family are Borrowers: tiny people living under the floorboards of a house. They “borrow” the things they need to live—a sugar cube here, a toy cup there—from the big people who own the house. One day, a young boy named Shawn discovers Arrietty, and they become friends. Unfortunately, adults find out about the Borrowers, and the two friends must do everything they can to keep Arrietty’s family safe. First, if you haven’t see the official trailer yet, you can watch it below courtesy of the Disney Movie Trailers YouTube page.

This short video, titled “Captured,” appeared on /Film on January 31st. It shows Arrietty’s mother being caught by an adult.

And the next clip is a promo showing the voice actors for the two lead characters. According to YouTube channel DCWSNX (via Anime News Network), the promo aired on the Disney Channel.

In addition to new teasers, a series of books related to the series has also been announced. VIZ Media will release a pair of film comics, an art book, and a picture book on February 7th. The film comic will be released in two full-color volumes at $16.99 U.S./$19.99 CAN each. The art book contains concept drawings, sketches, and interviews, and will be priced at $34.99 U.S./$39.99 CAN. Finally, the full-color picture book will be a simplified retelling of the film’s story that is targeted at children. It will be available for $19.99 U.S./$22.99 CAN

For more information on other Studio Ghibli films that Disney has brought to the U.S., go to Disney’s official Studio Ghibli page, and to learn more about VIZ Media’s Studio Ghibli titles, visit www.VIZ.com.