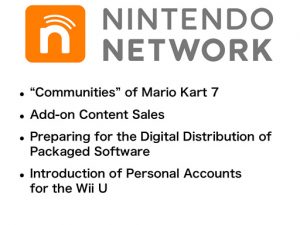 Nintendo just held its annual investors meeting in Japan. The presentation they gave has confirmed many rumors. The WiiU final design will be on display at E3 this year and the system will be on sale in Japan, North America, and Europe by then end of 2012.

The WiiU tablet controller will have Near Field Communication (NFC) built in. NFC is the same technology used in Skylanders: Spyro’s Adventure. It will be possible to make cards and figurines that will be able to read/write data just by being near the controller. They see many possible game uses for it as well as using it for micropayment options.

The Nintendo Network hinted on that Theatrythm box last week will be a single network for the 3DS and WiiU. They plan to make a single online ecosystem similar to Xbox Live or PSN. The Communities of Mario Kart 7 were mentioned as a preview of some of the functionality that the Nintendo Network will bring.

The Nintendo Network will also allow the buying of DLC. The first game to use DLC is Tobidasu Pricla Kiradeco Revolution (Japan only) which is only available in the eShop. The first retail game you’ll be able to buy DLC for is Theatrhythm Final Fantasy.

Starting with the WiiU you’ll be able to create a personal account for the Nintendo Network. This will be similar system to Gamertags for Xbox Live and PSN. No more friend codes that are system specific. Nintendo will also start digital distribution of retail games with the WiiU. They did not say when that would be available, so don’t expect that at launch but they will add the functionality.

So what do you think of the announcements? Excited? Scared they’ll screw it up? Sound off in the comments.