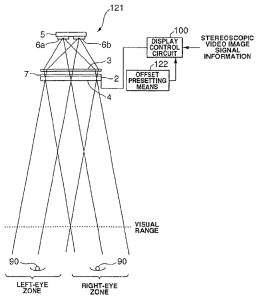 Recently, Nintendo was found to be on the wrong end of a lawsuit concerning the 3DS’s glasses-free 3D technology. Tomita Technologies, started by former Sony employee Seijiro Tomita, brought the lawsuit against Nintendo in 2011, and the New York federal court system found that Nintendo did, in fact, violate the basic principles of Tomita’s patent. The patent diagrams, seen in these filing documents, depicts a 3D system using offset stereoscopic images, creating a three-dimensional image without the use of glasses. Tomita’s attorney claims that the former Sony employee met with Nintendo in 2003 to discuss the potential of a 3D handheld system.

As a result of the decision, Nintendo has been ordered to pay $30.2 million in damages; however, it sounds like Nintendo may be considering an appeal. As Nintendo has now shipped over 30 million units worldwide, the payout is equivalent to $1 or less on each unit, which seems rather small for a technology that is so vital to the 3DS’s display and gameplay systems. With the appeal, Nintendo is seeking to get the remunerations reduced, if not completely set aside.