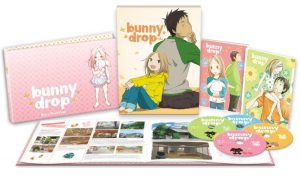 NIS America has licensed the 11-episode anime series bunny drop. The show follows Daikichi, a 30-year-old bachelor, and Rin, a 6-year-old child. Daikichi meets Rin at his grandfather Souichi’s funeral. There, he learns that she is Souichi’s illegitimate daughter who has been disowned by the rest of his family. As a result, Daikichi impulsively decides to raise Rin himself. Their story is to learn what family means and how difficult life can be for a single parent and their child.

bunny drop is slated for release on August 7th. The limited edition will feature the standard NIS America touch: an illustrated slip cover, a hardcover art book and English subtitles (no dubbing). The bunny drop anime is based on a manga series from Yumi Unita. Yen Press has released five of the nine volume series with volume six set to come out in August.