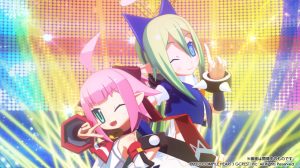 Last night was the annual NIS America press event where they announced three new games and one new anime series as well as the continuation of a second series. Surprisingly, the word Disgaea doesn’t appear in any of the releases below, but that doesn’t mean that there absolutely won’t be a Prinny cameo somewhere.

The Witch and the Hundred Knights is a PS3 action RPG developed by Nippon Ichi Software. From the screenshots, the game looks to feature hack-and-slash style combat where you can choose to play on the side of either good or evil. You will have 100 knights at your command with the ability to equip up to 5 weapons, creating multi-weapon combination attacks. Currently, The Witch and the Hundred Knights is slated for release in North America and Europe sometime in early 2013. We’ll have more on the game in the near future.

The second game announced is Mugen Souls for the PS3, coming later this year. Developed by Compile Heart (Hyperdimension Neptunia, Cross Edge) and GCrest (Tinier Me), Mugen Souls features a gridless turn-based battle system that looks to be similar to the one found in Hyperdimension Neptunia mk2 with the addition of something called “Moe Kills” which turn your enemies into items. The game is set across seven worlds, each with their own unique landscapes and societies, which “The Undisputed Goddess Chou-Chou” has decided to unite under her rule. NIS America did announce that some of the content in the game has been altered for North America and Europe. We’ve asked for clarification and are awaiting response.

The third game announced at the event is the PlayStation Network exclusive dungeon-crawler Legasista, coming this summer.  Legasista was developed for the PlayStation 3 by System Prisma (Cladun: This is an RPG). The game is set in a world where the technological age was abandoned long ago and now people fear technology as some form of dark magic. It features randomly-generated dungeons and a highly-customizable character creation system.

NIS America also announced a third volume of kimi ni todoke -From Me to You-, coming out on July 3rd. The series continues to follow the lives of Sawako and Kazehaya as they try to find a way to share their feelings with each other. As with all NIS America premium edition anime releases, it will come with a nice slipcase, exclusive artbook and a variety of bonus features on the discs. For those unfamiliar with the series, you can check out our review of volume one here, and be on the lookout for our review of volume two, coming soon.

The new anime license announced at the event was anohana: The Flower We Saw That Day. This premium edition will cover all 11 episodes and will be available on July 3rd. anohana is a slice-of-life series that follows a group of high school students who become separated after a series of tragic events. The series follows the group as they struggle to find themselves and whether they can put the past aside to come together for each other. The edition comes with 2 Blu-rays and 2 DVDs as well as an artbook entitled “The Super Peace Buster Chronicle” and on-disc extras.

We will have pictures and video for these titles as NIS America makes them available. Stay tuned!